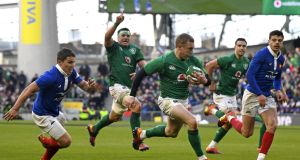 The old adage that “forwards win matches and backs decide by how match” might have left Ireland’s pack feeling a little shortchanged if they cared to grumble because for large tranches of the victory over France they were pitch perfect.

They won’t nitpick or be unduly concerned that there were a handful of occasions when their exemplary work didn’t get the reward it merited because of a misplaced pass or two and instead focus on the manner in which they sundered the French pack on the gain-line, in the scrum, out of touch and at the breakdown.

Ireland were sharp and accurate in their patterns, carrying powerfully, clearing out aggressively and utilising tip-on passes to wrongfoot French tacklers who arrived mob-handed believing that they could hammer the Irish player in possession. The upshot was that Ireland was able to work through phases of quick, front-foot ball.

The home varied the point of attack beautifully, working the fringes, picking out pods 10m away or slipping possession out the back to forage in wider channels and when they had rigorously exercised all those options, employing the inside pass to devastating effect.

The receivers came from depth, ran hard and also shifted the angles in support. The dominance upfront allowed Ireland’s halfbacks to dictate the game and for the backline to receive the quick, front-foot ball that they craved.

The tone was set from the third minute when Ireland captain, Rory Best, barrelled through the tackle of French scrumhalf Antoine Dupont, a human slingshot propelled over the line by James Ryan. The poignancy of the moment was lost initially in the maelstrom of the match but Best, in gentler times, will reflect on capping his final appearance in a Six Nations game at the Aviva stadium with a try.

It came from a lineout, well-thrown, the maul set quickly and the blue shirts driven back towards the line before Best peeled off down the short side a couple of metres out; the only French resistance came in the form of the physically overmatched Dupont.

Ireland’s utter dominance was reflected everywhere bar the scoreboard, the final margin of victory something of an anomaly when viewed through the prism of the 80 minutes. The home side could have pillaged 40-plus points and not been flattered; that they didn’t was down to a little imprecision that denied them three or four more tries.

Cian Healy and Tadhg Furlong were willing and hugely effective buttresses; normal service resumed in their high-quality contributions, alongside Best’s typical industry and leadership. Iain Henderson called the lineout – Ireland won 18 of 19 – excelled around the pitch and also managed to strip French tighthead prop Demba Bamba of possession in the build-up to Ireland’s third try.

James Ryan, with yet another man-of-the-match performance was at his marauding best, whether hunting down French players or picking a path through their massed ranks. His footwork, that of Healy and another try-scorer, Jack Conan, permitted them to dictate tackle terms.

In the manner in which the game panned out, Conan’s arrival for the unfortunate Josh van der Flier gave Ireland another carrying option. Peter O’Mahony was typically voracious in his work ethic, as was CJ Stander, who demonstrated his versatility in shifting to openside flanker to facilitate Conan.

The Munster number eight racked up 18 carries, hard earned 29m, but as he gently chided afterwards demonstrated another aspect to his game. “There are a few people who think I can’t pass or offload so it was good to show them that I can pass.”

It was a reference to his neat, perfectly timed inside ball to Keith Earls that sent the Irish wing scampering over for his 30th try in a green jersey. Stander smiled: “We tried the same play with Keith in the first half but we didn’t go through with it. We realised there was a bit of space there. If you can put Earlsy in space like that, he’s going to slice them and score.

“Scoring a try is great but when it’s a team try like that, Besty’s big throw, a bit of mauling, the outside guys running a few decoys; [it’s] a real team try. We gave ourselves the momentum [in the game] and it meant we made it easier for Johnny [Sexton] and Murr [Conor Murray] to play off that forward, front momentum.

“I think the front row especially went very well to create that momentum, and when the backs get a bit of space and a bit of ball they can show what they can do.”

Ireland rediscovered their playing rhythm and a catalyst was the camp they enjoyed in Belfast last week, the benefits of which were derived on and off the pitch. Stander explained: “It was good to just reconnect with each other.

“We did a few nice things, the black cab tour. We listened to other people’s problems. It was good to get together and enjoy our company, as a team. Look, in this competition, we probably didn’t give ourselves a chance in the first game.

“But now the pressure is back on to us, and I think that’s when we play well. If we look back, the Italy game wasn’t ideal but today we built on what we did last week, training-wise. People work with pressure definitely but it’s good to just play the game and enjoy it.”

A six-day turnaround to a Wales team chasing a Grand Slam in the Principality stadium will impose huge physical demands but Stander and his colleagues in the Irish pack will relish the imposition.