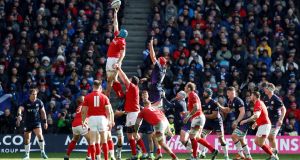 Wales’ Justin Tipuric wins a line out during the Six Nations fixture with Scotland earlier this month. Photograph: Russell Cheyne/Reuters

I’ll start where I finished on Monday with a key question. Can Ireland’s new-found gainline play dominate sufficiently to unsettle the Welsh defence re-set?

If yes, well then, an upset is possible, if not, Wales will be Grand Slam Champions. Led by Shaun Edwards, the Welsh are phenomenal at managing opposition’s onslaught into their gain line and then re-setting their defence.

This very aspect is the greatest test for Ireland.

We know a number of things, Ireland score most of their tries off lineouts but also build enormous phases through controlled diamond shaped one out plays; both are designed to place pressure on the opposition; like France.

This forward pressure game is not going to reap the same rewards; because?

Wales’ end goal is a red wall of 14 players set so quickly along the hind-most foot that building multiple phases can actually be a hindrance; as the attacking team (Ireland) may simply run out of players with the decked ball very vulnerable.

There will be no green grass, or at least far less than France offered

Where there is a hint of Irish variety Wales second man will stand off but depending on the Irish carry style, a basic high upper body carry, Ireland will be vulnerable to the second entry double hit slowing down the entire process while Wales peel/sprint away and fill the field; all ideally suited to negate the classic Ireland one out carry.

The Irish passing variety against France is the bare minimum required to avoid Welsh double hit or chop. Beyond that Ireland must distort Wales reset by attacking the heart of the ruck; up the middle with smoke to get Wales back peddling.

Then, like Scotland managed for their try by exposing the defensive shape of Jonathan Davies and Hadleigh Parkes with Davies flying to cut out Ireland width but with Parks behind leaving the hole.

Transition is an aspect Wales get brilliantly.

Make a mistake and they transition like no other 6 Nations team. This becomes especially challenging to Ireland’s “vulnerable” wide defence.

Wales also carry up the guts which will concertina Ireland’s defence leaving mismatches or space on the edges. Wales are far superior than England in transitioning the ball to those edges which is where the trouble really starts (massive defensive reading day for Garry Ringrose).

A wide and successful tackle area will honey pot Ireland to prevent another Welsh break affording even more subsequent space for Wales to rewind into. Hence emotional energy becomes crucial.

Can Ireland sustain/survive the Welsh game plan that will require that plus 20 tackles from Irish forwards as the game slips into the exhausting championship minutes at the end. Wales have the fitness, the game plan and emotional energy but Ireland are gaining ground.

The answer is in Ireland’s go forward; carry, kick, lineout maul and scrum.

Ireland have advantages in the lineout and possibly scrum but Welsh creativity is irrelevant over the 80 minutes as pressure, gainline and emotional energy will be all consuming.

Remember the Welsh defence is not lazy like the French and will require master strokes of ingenuity to breach or bucket loads of phases to inch backwards.

Another is the go forward kicking game. What a pleasure to see Jonny Sexton supported by several others in this skill which aids manipulating the Welsh backfield forced to second guess.

Move George North into decision-making places, and Ireland may reap rewards. But the Irish kicking game will face an entirely different pendulum than against France. Wales will expect the kicking game and have a back three capable of oscillating across the back field to fill space.

There will be no green grass, or at least far less than France offered. When Wales field, they do an entirely novel thing; they counter attack with the ball! Ireland’s variety in go forward against France is crucial in this regard.

The lineout and its maul become monster elements to Ireland’s control and go-forward. Here Wales are a tad vulnerable.

Ken Owens connection to his lineout is not symbiotic and can cause malfunctions to be picked off by Peter O’Mahony and co. Tactically, do Wales (and Ireland for that matter) keep the ball in play rather than the safety of touch? Ireland had 18 lineouts against France - Wales will not be this generous with their penalties and finding touch.

I’m delighted for Tadhg Beirne and especially interested in Andrew Porter’s championship minutes scrummaging cameo. Both will be crucial.

So too Liam Williams's other parts; his defensive reading and positioning.

It’ll be a cracking game, where the Welsh game-plan advantage is its simplicity; they are rarely burdened by Ireland’s recent option-paralysis issues.

Regardless of game plans, both are brilliant teams, but both require huge possession and gainlines to win their games.

So which team will a probable 50:50 possession in unyielding gainlines best suit?

That is the question!