Liam Toland: Beirne’s edge is ability to play the system or invent his own 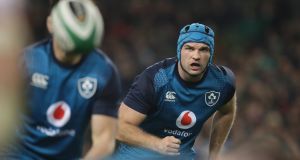 Ireland’s Tadhg Beirne against the USA. His ability and value is obvious even when the system stuttered as the USA asked some probing questions. Photograph: Billy Stickland/Inpho

How does one impress? Is it the brilliant individual that forces his way into the RWC 2019 squad? I mused on Friday that an insight into a team’s culture is gleaned from their second-string team. An obvious example is Leinster’s humiliating defeat of Ospreys on Friday evening (for both Leinster and Ospreys). It was extremely helpful that both Scott Fardy and Ross Molony were in the engine room.

Ospreys arrived with some devastating running lines early on that questioned Leinster, but then the two big men Fardy and Molony stepped into the breach, mastering the lineout and were especially powerful in the heavy action. And while last season’s fourth-choice openside was playing for Ireland on Saturday, his replacement Scott Penny stepped in with no devaluation to the system. Behind them is arguably Leinster’s fourth-choice outhalf Ciarán Frawley (before Joey Carbery left) looking to the manor born.

Watching Leinster and Ireland, I wonder in what way to judge how something impresses; is it the individual or the system?

Based on those two criteria Tadhg Beirne is the clear winner from Saturday. His ability and value is obvious, even when the system stuttered as the USA asked some probing questions.

His comfort leading the triangle formation, so crucial to Joe Schmidt’s structure, is immense. As his scrumhalf pass is arriving it looks like the ball could go anywhere in Beirne’s hands. That is, he sells the carry, like he did when being smashed by USA hooker Joe Taufete’e, fixing his opposition defence before he executes the carry, pull back pass or tip on.

Forwards in international teams execute this very move, but very few sell the carry first, which makes their intentions very obvious and much more dangerous to the subsequent receiver.

Iain Henderson led the formation at the end of the first half and executing the exact same play as Beirne had been doing. The Ulster man didn’t sell the carry which afforded a great defensive read from John Quill, who knew exactly what Henderson was about to do and smashed Carbery.

Reading the play is one thing, but fitting into the system is another. Take the seventh phase of play on the half hour. Beirne runs a hard line off John Cooney but doesn’t get it; decoy! Then on the ninth phase, Beirne leads the triangle as first receiver; runs on the ball, shapes to pop pass to Rhys Ruddock, but at the last second pulls back to Ross Byrne; read and execution.

But earlier in the game we witnessed a full array of skills and football knowledge from Beirne; starting from a Henderson steel off the deck after minutes. Beirne offered, leading the triangle; sold the run, fixed defenders and pulled the sweetest pass back to Carbery. Others would have carried into contact but Beirne clearly understands the value of a turnover to his outside backs, with Garry Ringrose subsequently being pulled down. He cleared out the next breakdown, carried a crappy ball on the next play. Two plays later he shuffled a beauty on to Niall Scannell, and then he swept off the deck to provide the try for Andrew Conway.

In essence he is comfortable in the system but equally outside the system, and hence his value as a starter, but especially coming off the bench having soaked up game information to that point.

With this in mind then Henderson is the looser of the five top secondrows. Fine margins, indeed, but he has struggled to get the form that has brought him thus far. Why? Remains to be seen, but if Beirne doesn’t start the top Tests in the secondrow (understandable Toner and Ryan) then he must be on the bench. I noted on Friday that cracking try Owen Finegan scored coming off the bench against France in the 1999 Rugby World Cup final. Beirne is better than Finegan.

On Friday I noted the value of both Darren Sweetnam and Conway based on their hunger for action; not all wingers have this need. Sweetnam’s afternoon was curtailed, but Conway’s was exactly as predicted. Lethal in many ways but especially off those broken-field breakdowns where he can sneak his way onto the ball. And in many ways this was the story of the USA.

The visitors were very good in many ways, but lacked the required subtlety in defence to match Ireland’s relentless system topped off by hungry players like Conway.

But the Irish system didn’t function throughout, and a possible looser in this was Stuart McCloskey where the new players and units struggled at times. An unclean lineout, or slightly missed timed run, or a slightly inaccurate pass prevented McCloskey from really finding his rhythm.

Will Addison, however, looked comfortable regardless of shape or system, where more pitch time with Conway et al would provide an interesting counter-attacking unit.

So, how does one impress? Last Saturday some players required the system to function and others simply created the system – there is a difference.

1 Owen Doyle: Creeping professionalism of schools rugby a threat to the game
2 Six Nations: A 21st-century tournament that saw Irish rugby come of age
3 David Clifford sends everyone back to their corners unbeaten
4 Mike Catt hopes to have Irish backs purring in Six Nations
5 Six Nations: Ireland are contenders but England still the team to beat
Real news has value SUBSCRIBE