Lewis Ludlam eager to make his presence felt for England

Northampton flanker relishing the prospect of facing Ireland at Twickenham 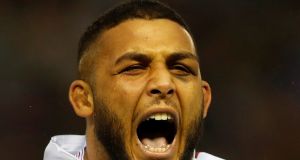 Lewis Ludlam: “The moment I get really pumped up is during the anthems. That’s when my emotions are really high. The hairs stand up on the back of my neck and that’s when you really know you’re in it.” Photograph: Russell Cheyne/Reuters

Lewis Ludlam is nothing if not passionate.

Whether you consider his military metaphors before England’s Calcutta Cup victory to be inappropriate or innocuous, malice was not his motivation.

Rather, Ludlam wears his heart on his sleeve, belting out the national anthem and, as he admits, buzzing with excitement the moment he learns he has made the starting line-up.

If the backlash against his comments is part of his learning curve off the field, he continues his swift progress on it. Against Scotland Ludlam made only his fourth England start and his first in the Six Nations, but he made his considerable presence felt in a callow back row alongside 23-year-old Sam Underhill and Tom Curry, 21. They combined to get the edge at the breakdown and ultimately get England’s Six Nations campaign back on track.

Eddie Jones has clearly been taken by the all-action Ludlam, having been so impressed by him last summer when he was a late call-up to the England squad preparing to face the Barbarians.

The feeling seems mutual judging by the flanker’s willingness to echo his coach’s fighting talk. You get the sense that Ludlam has this week been advised not to mention the war but his enthusiasm again shines through when addressing Ireland’s visit to Twickenham on Sunday for a contest that looks certain to define England’s Six Nations.

Victory keeps their title hopes alive – all the more so if Wales do them a favour against France 24 hours earlier – and Ludlam is convinced it is within England’s grasp.

“As a team and as players we are always looking at hunting other teams down and scraping out wins and that has always been my mindset,” said Ludlam. “We want to impose ourselves on other teams and we will try and do that as much as possible.”

Asked if England can still win what would be a first Six Nations title since 2017, Ludlam added: “Absolutely, yes. We back ourselves. We always back ourselves, otherwise we wouldn’t be out there. We have full belief in the team. It would be a hard thing to do but we’re aware of the ability we have in the team.”

Having made his mark against Scotland, Ludlam will be hoping to keep his place on Sunday. Jones, mindful of Scotland’s breakdown threat, opted to effectively go with three openside flankers and while Courtney Lawes could return against Ireland, or Ben Earl be given a first start, Ludlam would be unfortunate if he were to drop to the bench.

“I get revved up as soon as I know the team,” added Ludlam.

“After it’s announced I’m buzzing and ready. I’m thinking about situations and being involved in the game. But the moment I get really pumped up is during the anthems. That’s when my emotions are really high. The hairs stand up on the back of my neck and that’s when you really know you’re in it. That’s when it gets surreal.

“It’s a good thing, but there’s a fine line between being excited and having the emotion drain you. I haven’t felt drained in games yet but I’m fully aware that the lads who have played in the shirt for a long time have learned how to control their emotions and how to switch them on and off. I’m excited early on but I don’t necessarily think that’s a bad thing, but it’s something I’m working on.”

The back row challenge awaiting whichever trio Jones opts for is formidable, all the more so with Tom Curry still learning on the job at No8 in the absence of the injured Billy Vunipola. Indeed, Ireland’s CJ Stander has been among the standout performers of the championship so far, particularly against Wales when in unison with Josh van der Flier and Peter O’Mahony.

“That’s why you play the game – to challenge yourself against the best,” said Ludlam. “Tom was awesome in Edinburgh. It just goes to show what a great player he is. He received a lot of criticism for the France game but has worked really hard to get things right. To put out that performance at the weekend is testament to him, so I’m really happy for him. He’s hungry to learn.”