‘I think Eddie says some things that overstep the mark sometimes’ 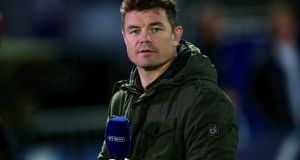 Brian O’Driscoll has accused Eddie Jones of “scaremongering” and admitted he relished the sight of the England head coach’s comments backfiring so spectacularly in France earlier this month.

Jones was widely ridiculed after his threat to face the French with “absolute brutality” was met with a below-par 24-17 defeat in Paris in the opening game of this year’s Six Nations.

Heading into this weekend’s clash against Ireland at Twickenham, O’Driscoll referenced Jones’s barb at Johnny Sexton’s parents four years ago as an example of Jones’s habit of going too far.

“He said something about Johnny Sexton and brought his mum and dad into it four years ago and that’s not benefiting or building the game – that’s scaremongering.

“We don’t want that, we’re trying to help the product, not hinder it. Sometimes he gets it wrong.

“I think the stuff about brutality is harmless enough, particularly when you get your backside handed to you after the game so we can all have a good chuckle about it.

“There are many different sides to Eddie. I think he very much thinks about what he is saying and is quite calculated. I think there are certain things that are close to the edge.”

Speaking at the Laureus Sports Awards in Berlin, O’Driscoll recalled the time during his illustrious career when he was accused of taking a step too far in kindling another pre-match controversy.

As detailed in his autobiography, O’Driscoll earned a stinging rebuke from the then England coach Clive Woodward after deriding Twickenham’s “prawn sandwich brigade”.

And O’Driscoll could not resist another sly dig in the direction of Twickenham’s corporate reputation ahead of a fixture which is expected to go a long way to deciding the destiny of this year’s title.

O’Driscoll added: “Of course there is huge corporate in all of rugby these days and that is the reality.

“It is what it is, you’ll have fans in their Range Rovers in the West Car Park. If that’s their thing, brilliant, it’s part of the history of the Six Nations.

“As a player you look over enviously thinking: ‘There they are, enjoying their champagne and canapes, and here we are, butterflies and stomachs rumbling, and we’ve got to go out and play a game’.”