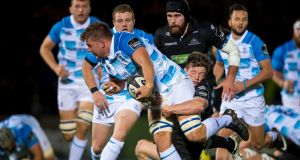 Glasgow Warriors continued their winning sequence in the Guinness Pro 14 after outscoring Leinster at Scotstoun with a performance of fast-running rugby that allowed the home side to claim a bonus point and an eighth consecutive win.

Leinster came to Scotstoun having soundly defeated Glasgow in European Cup rugby at the ground last month. But any hopes of repeating this result were dashed in the first half when Glasgow put on a crowd-pleasing performance of delightful attacking running before being tamed in the second half by the heavier and stronger Leinster pack.

With so many first-choice players missing from their side, Leinster were not expected to win against a Glasgow side that was less affected by the absence of senior players.

Moreover, having lost their two opening European matches, Glasgow are effectively out of that competition and as such their priority is the league. That was evident from the off with Glasgow showing the greater determination to take control of the game with a blend of fast and risk taking rugby that produced points in the first half.

Leinster were unfortunate not to gain a losing bonus point in what was the first of seven cross conference matches but they can take credit for winning the second half and for the way their debutant players performed against the league leaders.

Leinster were quick out of the blocks, scoring a blistering try in the opening minutes after fullback Jordan Larmour cut the Glasgow defence to shreds with a penetrating run that ended with Jamison Gibson Park darting over from close range and Ross Byrne converting.

No sooner had the players gathered breath than Glasgow replied in kind as Fijian international Niko Matawalu set up a try for George Horne, converted by elder brother Peter to level the scores.

Leinster again showed their danger in the outside channels, attacking on the left flank before moving the ball to the other touchline for Rory O’Loughlin to claim the second try, Byrne again converting.

The breakneck pace set by both teams continued with another break by Matawalu who again had the younger Horne brother in support. The Warriors’ scrumhalf was caught but when the ball was recycled centre Nick Grigg was on hand to bag the try, Peter Horne’s conversion again levelling the scores.

Leinster were dealt a blow when Jordi Murphy was carded for preventing Glasgow taking a tap penalty. The one-man advantage soon told as Warriors used their forwards close to the line to set up a second try for George Horne, comfortably converted by brother Peter.

Then with just 26 minutes of the game played Glasgow achieved their bonus point score with an outrageously audacious score made by a length-of-the- pitch run by Matawalu and the finish by Grigg. Horne added the extras before goaling a penalty.

Leinster tried desperately to narrow the lead from two penalty-created lineouts in the corner, but to no avail leaving Glasgow leading 31-14 at half-time.

Glasgow were reduced to 14 men when lock Scott Cummings was carded early in the second half allowing Leinster to apply forward pressure and ultimately a try in the corner for wing Adam Byrne, expertly converted by Ross Byrne.

No sooner was Cummings back on the field than Glasgow lost replacement Alex Dunbar to the bin for slowing down the ball as Leinster went for the kill.

Leinster were now looking the stronger side but the visitors failed to capitalise when they butchered a four-on-two attack albeit there was a territorial dividend.

With rain arriving the accuracy of the earlier passing was gone, denying the likes of Matawalu, named as man of the match, from working further magic. With the game going into its final minutes the contest became more of a forward slog but the battle between the heavyweights yielded no further points leaving Glasgow winners and able to celebrate continued success in the Guinness Pro 14.