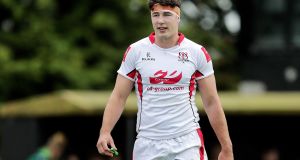 Noel McNamara has chosen five of last year’s under-20 Grand Slam-winning team to start for Ireland in the first match of their defence against Scotland on Friday.

There is a wealth of experience in the pack with Clontarf loosehead Ward and Ulster hooker Tom Stewart packing down in the front row alongside Leinster academy tighthead and vice-captain Clarkson, who started all five of last year’s Six Nations games.

Deeny and towering Munster academy lock Ahern are named in the second row with Sean O’Brien and Mark Hernan joining captain McCann in the backrow to complete the pack, with a further three Ulster players named in the backline.

Lewis Finlay starts at scrumhalf and continues his exciting halfback partnership with Cork Constitution outhalf Jack Crowley, who pulled the strings for Ireland under-20s in their defeat of Munster Development over Christmas.

Ulster academy centre Hayden Hyde and Dan Kelly, who has come through the IQ Rugby programme, are selected in midfield, with Connacht’s Oran McNulty, Ethan McIlroy and Leinster winger Andrew Smith forming the back three.

Hooker John McKee won seven caps during last season’s Under-20 Six Nations and U20 World Championship campaigns and is the sixth returning player named in Friday’s matchday 23, as he provides frontrow cover alongside Ciaran Ryan and Ryan McMahon.

Solskjaer requires more than Sancho to mount a title tilt 21:46
No fans, no problem as far as Tiger Woods is concerned in San Francisco 21:29
Second Waterford FC player to undergo testing after reporting Covid-19 symptoms 21:15
Crowd limits to remain at 200 as Government stalls move to phase four 21:15
Ryan Brennan secures the points for 10-man Shelbourne in Donegal 20:18
Crossword Get access to over 6,000 interactive crosswords