Joey Carbery sure to be talked about in absentia

‘Joey is brave, potentially to a fault, because he takes no heed who is in front of him,’ says Schmidt 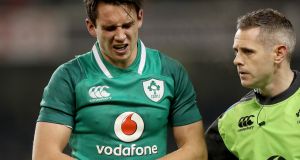 Only one thing in life worse than being talked about. A broken Joey Carbery disappears from view for now. Peni Ravai achieved on 60 minutes what Jale Vatubua tried and failed on seven minutes: legally remove the electric surge behind Ireland’s stuttering pack.

Carbery will be talked about in absentia. More so than Paddy Jackson, more than the next wave of understudies to Johnny Sexton.

Schmidt neglected to mention the five words – “Ross Byrne and Cathal Marsh” – that tip off Leo Cullen’s tongue after any Carbery query.

The Leinster pair reappear in his rear-view mirror, but its Munster duo Tyler Bleyendaal and JJ Hanrahan who are real contenders, as Ian Keatley carves out a career of honest toil.

What we do know is Schmidt does not dictate the Leinster XV to Cullen. Evidently, that whisper is a myth.

The minutes never lie. Byrne has 543 as the blue 10 since September. Carbery has 459 minutes, all at fullback, with his thrilling 66 minutes as Ireland outhalf followed by at least six weeks on the sidelines to mend an “undisplaced” left forearm.

“Joey is brave, potentially to a fault, because he takes no heed who is in front of him,” said Schmidt after the 22 year old was repeatedly smeared into the turf.

Carbery, despite being swathed three out of seven times, has a reliable tackle technique honed in New Zealand, Athy and Blackrock by his coaching father.

Still, two ankle ligament tears last season before this fracture means the boy who Graham Henry assured everyone would be the 10 up to the 2027 World Cup will play no rugby until 2018.

He will be talked about though. The fullback or outhalf debate will rage.

“It is an unfortunate situation for us [Ireland],” said Schmidt, “but I totally understand; they [Leinster] got Johnny Sexton and he has to play. When Rob Kearney was injured Joey took the responsibility at fullback. I just appreciated he was getting game time.”

Schmidt speak. When asked about one subject he provides insight into another. Translation: Kearney remains my first choice fullback.

“I would love to see Joey play 10 more often,” he added. “I think that would help his development.”

Cullen goes with Byrne as his reserve 10. Schmidt goes with Keatley.

Stay tuned, the next outhalf on the block should be pictured in Carton House today. But Carbery remains the ideal future.

“I thought his ability to organise others is coming along. That’s one of the biggest responsibilities of a 10...the pass to Darren Sweetnam – I don’t think you will see one more accurate.”

Carbery himself aims to the best player on the planet.

“Joey? Yeah, I’ve been fortunate to play against him a few times for Montpellier but he was at fullback,” said Nadolo with an unmistakable Aussie twang as his father Isei Nasiganiyavi moved the clan to Brisbane in the 1980s to play for Queensland.

“At 10 I thought he played really well. He’s one of those players who has a really good step. The right-foot step can beat defenders pretty easily, and I think he got that from growing up in Kiwi land...”

The same step that walked into the swinging 120kg frame of a ravenous Ravai.

“Sexton is obviously your number one 10 but you guys are covered there.”

Speaking of size, Nadolo’s freakish 22-stone body is offset by skills any All Black would crave, especially his ability to drop ball on to delicate boot in fluid motion.

“Definitely the game is not about size,” said Nadolo. “It’s about what’s up here [nods to brain] and how you use it. Guys like Damian McKenzie, Joey Carbery and people like that, that’s why they’re the best in the world. They’re not the biggest guys on the rugby field but they’re not afraid either. They’re smart, so they choose when to run and when to play. They’re confidence players, and if they’ve got confidence they’re unstoppable.”

He really means McKenzie, a tiny genius who is biding his time at 15 as Barrett rules the world.

“The game is not going that way anymore,” Nadolo added. “I come from Southern Hemisphere and we play a high-tempo game, but when you come over here, playing Leinster in the European Cup, the speed of it is up there with playing Super Rugby. It’s more speed than anything else, and the skill has gone up another level. The offloads are coming in, and there’s less rucks. The game is going that way.”

Not soon enough. Carbery wears a cast this morning. The fault is in his bravery.