Ireland second-string left frayed as Fiji put up a fight 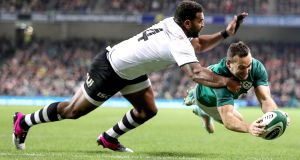 Ireland’s Dave Kearney scores a try despite the efforts of Timoci Nagusa of Fiji during the the game at the Aviva stadium. Photograph: Dan Sheridan/Inpho

Much like the overall collective performance, many of those auditioning for Joe Schmidt’s Ireland had patchy games, as ultimately the scoreline accurately reflected how Fiji dragged them into an edgy scrap.

Nowhere was this more evident than at the breakdown, where in stark contrast to last week’s frontliners, Irish players often struggled to clear out Fijian players over the ball. They also left themselves exposed to counter-rucking by the visitors, who brought a whole heap of physicality to the collisions.

Irish players also ignored overlaps by running directly into contact when there was space out wide, or in behind, although that said, they had 69 per cent possession and 74 per cent territory. Then again, with 12 of the squad on five caps or less, this was a valuable opportunity to expose largely untried players at Test level.

Furthermore, Schmidt and co probably learned more from this being a hard-earned win than an easy romp.

As befits a Fijian team which had beaten two Tier One teams in the same calendar year for the first time ever, the visitors were better than the bookies’ odds of plus 24 or 25 points. They also brought a decent scrum, and will actually reflect ruefully on a few chances that they let slip.

Joey Carbery’s brilliance ignited the game early on by setting up a try for Darren Sweetnam. Andrew Conway marked an inventive, high energy game by creating a try for the other winger, Dave Kearney, with two well worked scores which successfully tightened the Fijian defence. But after a Jack Conan turnover try made it 17-3, Ireland were pegged back to all square in large part through their own inaccuracies.

The pity was that Carbery was unable to see out the game, departing with what looked like a forearm injury. Stuart McCloskey and Chris Farrell often got Ireland on the front foot, as did Rhys Ruddock, who led from the front, and Ultan Dillane.

Rob Herring again did plenty of selfless team work and was one of the more effective in clearing out at ruck time.

In the final quarter, Ireland were indebted to the impact of their bench, especially Cian Healy and Tadhg Furlong, while Ian Keatley landed two clutch penalties.

The pre-match pyrotechnics were augmented by the traditional Fijian war dance, the Cibi. They started better too, countering off a deep Kieran Marmion box kick which eventually saw Nemani Nadolo given a run up the touchline to beat Marmion, curiously stationed out there, before being tackled by Sweetnam. His offload inside to Henry Senioli drifted forward.

Instead, it was Ireland who struck first, thanks in the main to the inventiveness of Carbery. After Jack McGrath, Farrell and Ruddock trucked it up, Herring took Marmion’s pass as the middle man of a three-man screen which drew in defenders before passing the ball out the back to Carbery. He spotted a mismatch with the prop Campese Ma’afu, stepped inside him and then stepped away from Kini Murimurivalu and put Sweetnam over for his first Test try on his full debut with a long left to right pass.

Carbery missed the touchline conversion and was then dumped and winded by a huge hit by Jale Vatabua, the almost inevitable consequence of a delayed, well-timed pass.

The Fijians again quickly demonstrated their ability to use the width of the pitch from anywhere with a couple of long passes releasing Nadolo, and this time he did link with Seniloli, who’d made another of his trailer runs infield before he was tackled.

Timoci Nagusa also demonstrated their eagerness to counter-ruck when blowing Jordi Murphy off the ball after Marmion was caught in possession to end a promising multi-phase attack. Instead, Farrell was penalised for going to ground and when Marmion’s skewed box kick put his forwards offside, Ben Volavola opened Fiji’s account.

Nonetheless, Ireland struck again when Marmion worked a switch with Stuart McCloskey, who put his team on the front foot. After further carries by Ruddock, McGrath and Dillane, McCloskey checked the defence and put Conway into space, the fullback hitting the line and stepping to Murimurivalu’s outside shoulder in giving Kearney the try-scoring pass. The winger’s finish was made easier by Timoci Nagusa drifting infield.

An indicator of the mood was that by the 28th minute, we had our first Mexican Wave. It continued until being interrupted by McCloskey leading a foot rush up field after Conway contested a cross kick by Carbery and a 33rd minute ‘try’ by Kearney was correctly ruled out after recourse to the TMO showed Conway had palmed the ball forward.

In any case, when Volavola botched a set move off the ensuing scrum, Dominiko Waqaniburuto then spilled the ball in anticipating contact with Murphy, and Jack Conan picked up to show the Fijian chasers a clean pair of heels and score. Just like that really. Carbery converted for a 17-3 lead.

Ireland’s confidence was growing, although offloads by McCloskey and Conway didn’t go to hand, before one dancing little break by Carbery was augmented by a stunning offload, but Sweetnam was pinged for sealing. Instead, with the last play of the half, Fiji injected new life into themselves and the match with a near reprise of an earlier move in moving the ball along the line just outside their 22.

The last three passes were all from forwards, openside Akapusi Qera and locks Apisalome Ratuniyarawa and Leone Nakarawa passing before the tackle to bypass the onrushing defence and finding Nadolo on the touchline. Despite having the narrowest of channels to work with, Nadolo showed his deft side with a delicate grubber up the line past Sweetnam and then gathered the ball to step Conway in one movement before offloading when tackled by Kearney for Seniloli’s trademark trailer infield to be rewarded with a try under the posts.

Third time lucky, so to speak, as the Romanian-based Seniloli, who scored a hat-trick in their handsome Pacific Nations Cup win away to Samoa, to touch down his eighth Test try. Volavola’s conversion left it 17-10 at the break.

The so-called ‘Championship Minutes’ yielded another dividend for Fiji within five minutes of the restart. Conway had run back against the grain to pass back for Sweetnam in one well worked counter-attack – Sweetnam then beating three players before offloading off the deck to Marmion who was tackled by the last man – when the same two players passed infield to launch another counter.

But this time, with a three-on-two, Kearney’s attempted pass couldn’t clear Timoci Nagusa, who picked off the pass one handed and ran in the try from half-way. Volavola’s conversion drew the sides level.

When Ireland eschewed a likely three-pointer by going to the corner, the maul was held up and Ruddock was done for not releasing when Murphy could not effect the clear-out. Instead, after Nemani Nagusa’s hit contributed to Farrell spilling the ball, typically quick hands across the line released Timoci Nagusa. Conway was enough of a road block to force an attempted offload which, surprisingly, Nakarawa spilled.

The replacement Irish frontrow came on together and immediately won a scrum penalty. Cian Healy followed this up with a trademark charge, and offload, but Ruddock was pinged for not releasing. After Conway was unlucky to see his deft grubber up the touchline veer onto the corner flag after being released by McCloskey, another attack floundered on Ireland’s inability to clear out a ruck – Murphy, Tadhg Furlong and Ruddock on this occasion.

After the previous recycle, Carbery had attempted another of his jinking runs only to be unceremoniously dumped by the replacement prop Peni Ravai, and promptly departed with what looked a worrying arm injury.

His replacement, Keatley, pushed Ireland back in front with a penalty, but after Kieran Treadwell couldn’t gather Volavola’s restart, Murphy was offside and Volavola levelled again. Ireland were grateful that Murimurivalu lifted Healy above the horizontal and dumped him, even if Healy mightn’t have been, for Keatley to restore Ireland’s lead.

The box kicking of Marmion and then Luke McGrath, and the chasing and aerial competitiveness of Sweetnam and Treadwell in the air forced spillages from Murimurivalu and Nadolo.

There were even chants of ‘Ire-land’ in the endgame, before Luke McGrath kicked the final scrum ball dead to fittingly half-hearted celebrations.