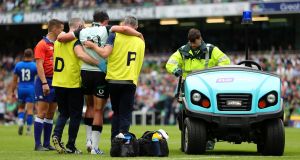 Joey Carbery is taken off the field injured during the Guinness Summer Series match between Ireland and Italy at the Aviva Stadium on Saturday. Photograph: Dan Mullan/Getty Images

Certitude: the best-laid plans will be ripped asunder as the 2019 World Cup becomes an event based on durability rather than ability.

Who can smile this Monday morning?

Certainly Jack Carty. Yet again, the Connacht outhalf looked a confident and able replacement, but the loss of Joey Carbery’s creative instincts after his kicking masterclass against Italy cast a pall – be it permanent or temporary – over Ireland’s tournament preparations.

Johnny Sexton is fit to play, following a thumb injury, and, while Joe Schmidt is keen to “forge ahead” despite Twickenham’s promise of punishment on Saturday week, the selection map could be altered dramatically by the next medical update.

Deep concerns arise from the sight of Carbery being driven off the field. Still only 23, he looks more comfortable in the international arena than current All Black 10 Richie Mo’unga or Michael Cheika’s renewed Wallaby hope via Ulster, Christian Lealiifano. Fleeting glimpses of Carbery wearing a green jersey since a stunning yet injury-disrupted Fiji performance in November 2017 have him firmly gripping the coattails of rugby’s leading outhalves: Sexton, Beauden Barrett, Owen Farrell and Handré Pollard.

He is so obviously world class.

Until we get more certainty on Carbery’s swollen left ankle, the Irish selection conundrum can focus on Jack McGrath

The injury spectre is by no means Ireland’s unique curse. New Zealand coach Steve Hansen’s initial masterplan was to use Beauden Barrett and the currently crocked Damian McKenzie in a dual play-maker offence. On Saturday the world champions were outmatched by Australia before Scott Barrett’s red card, with the Mo’unga experiment running out of time.

Until we get more certainty on Carbery’s swollen left ankle, the Irish selection conundrum can focus on Jack McGrath.

These are worrying times for the St Mary’s prop whose dramatic slide began after the 2017 British and Irish Lions tour when he was capped in all three tests. As it currently stands, McGrath is sixth choice, with Schmidt expected to bring five props to Japan.

“Not sure about my thinking but it was tactical, definitely,” said Schmidt when asked to discuss McGrath’s removal at half-time. There followed an ode to McGrath’s ability to get “up off the line” and make “some good impact tackles”, despite ESPN statistics only awarding him two tackles, one turnover and the concession of a costly penalty.

“And Jack, for us, is very good around our attacking breakdown as well.”

Aren’t they all by now?

McGrath has done everything expected of him this past year by upping sticks to join Ulster but, currently, Munster’s Dave Kilcoyne is leading the race to be named as Cian Healy’s understudy. The worry for him centres around Healy being kept on ice at half-time. Instead, Andrew Porter was told to temporarily forget the past two years of learning his tighthead trade. This comes down to Schmidt needing a third loosehead option when Russia and Samoa rumble into view.

Schmidt’s response gives hope to many but information to nobody

Bealham’s selection would signal a code-red crisis. Schmidt’s response gives hope to many but information to nobody. The Ireland coach suggested cutting three more players only to double back and blame World Rugby for his need to bring 43 bodies to Portugal next week because the player welfare demands on eventually naming a 31-man squad are proving “very, very complicated”.

The coach also refused to shine any light on his thinking around Chris Farrell and Andrew Conway making the travelling party, despite the pair hitting the ground running on Saturday. Both should travel if Schmidt opts for five halfbacks and 17 forwards. If he goes with 18 forwards Conway, despite Saturday’s excellent aerial display, will struggle to dislodge Jordan Larmour.

There’s a reckoning ahead but Jean Kleyn and Tadhg Beirne – possibly in a three-way scrap with Rhys Ruddock and Jordi Murphy for the last backrow spot – also made impressive opening statements.

Injuries will end up sorting this out.