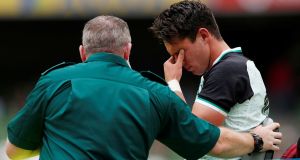 Ireland’s Joey Carbery is helped from the pitch after sustaining an injury. Photograph: Russell Cheyne/Reuters

Ireland duly negotiated their first of four World Cup warm-up games, but this ninth successive win over the Azzurri was not without its flaws and hiccups, and most disappointingly of all, an injury to Joey Carbery.

The Munster outhalf’s inventive kicking and passing had been one of the game’s highlights, but he crumbled under a clutch of Italian and Irish bodies when defending the Irish line, and his left leg was trapped awkwardly. Whether it was an injury to his left leg or ankle, he looked concerned and was carried off on a motorised stretcher.

There will be an anxious wait for confirmation of the injury, but at least it happened in the first rather than final warm-up game.

Devin Toner also seemed to be limping after briefly returning to the field as a blood replacement for Jean Kleyn, but appeared less concerned and, like Rob Herring at the end of the first quarter, walked off of his own steam. It was an unfortunate day for Herring, having had one knock-on and seen one lineout throw stolen, before Niall Scannell showed up well in the last hour.

Although a low-key, scrappy, stop-start game petered out anti-climactically, many of those who needed big games duly delivered.

Tommy O’Donnell laid down a marker with his customary all-round energy and dynamic carrying, while Rhys Ruddock, always showing up for carries, and Jordi Murphy also had industrious games.

Kleyn did his South African enforcer thing, ending one bout of pressure with a thumping hit, and although one Irish scrum buckled after Andrew Porter had switched to openside, it was also while Kleyn was temporarily off the pitch with a blood injury.

Luke McGrath was zippy and energetic off the base, although Kieran Marmion was every bit as effective off the bench.

Chris Farrell, in a rare enough outing at inside centre, provided some thumping hits early on to draw a line in the sand and as well as some strong carries, he demonstrated his deft handling skills.

The outside three all worked hard, Jordan Larmour giving try-scoring assists to both Dave Kearney and Andrew Conway, whose heavily utilised aerial skills contributed to him earning a Man of the Match award.

Tactically, it was interesting to witness Ireland unveil much more of a kicking game, and a highly varied one at that. Perhaps this was in part due to the straight running not having that much joy against an eager and physical Italian defence, obliging Carbery to adapt accordingly.

One phase of play illustrated the point perfectly. Carbery, inside his own 22 for a restart, cross-kicked (as he’d done at the off) for Conway to win his aerial duel. Then, a couple of recycles later, he grubbered diagonally for Kearney to gather by the touchline.

The winger followed up his perfectly weighted kick by tackling Matteo Minozzi short of the line, with Garry Ringrose and Tommy O’Donnell first on the scene to earn a five metre scrum. The pitch-length gain and ensuing pressure yielded a third Irish try and a 19-10 interval lead.

The Italians were disrupted by losing their promising 21-year-old centre Marco Zanon, who had been picked to make his second test appearance after an eye-catching debut in their concluding Six Nations fixture against France, during the warm-up.

The exciting Matteo Minozzi, a full-back and winger who had scored in four successive games in the 2018 Six Nations, was thus pitched into midfield in his first outing since suffering a badly damaged knee in August of last year.

He was replaced by ex-Irish Under-20 and Leinster outhalf Ian McKinley by half-time in a significantly reshuffled backline. Of some compensation for Conor O’Shea was that the ex-England under-20 captain Callum Braley upped the tempo on his debut and Italy stayed alive when looking like they might wilt.

Not that it showed as they struck first, albeit Kearney might have opened the scoring when denied just shy of the line by pressure from Angelo Esposito as he attempted to gather Carbery’s kick ahead after a fumble by Riccioni.

Instead, Italy went to the corner three times in a row - the first after Jack McGrath was penalised at a scrum - and after Jimmy Tuivaiti was held up short of the line, flanker Maxime Mbanda merely had to pick up and flop over untouched. Simon Easterby would not have enjoyed the relatively soft defence and unguarded pillar.

Ireland’s response was emphatic, scrum pressure helping to earn an attacking throw and after the maul and some one-off drives were held up, Farrell shaped to do the same but instead pivoted and pulled the ball back for Carbery, also helped by Garry Ringrose’s decoy run, to skate through the ensuing gap and convert.

However, when Larmour chased his own chip he was beaten to the ball by Giuglielmo Palazzani, and after Minozzi’s break, the Azzurri twice found space on Ireland’s defensive edge. On the second occasion, this drew up Larmour for Giulio Besigni to chip through for Canna to score.

Again Ireland’s strong response was founded in another scrum penalty and another penalty to the corner. Opting for off the top ball, Farrell’s good line and carry set up quick attacking ball five metres over the gain line. Ruddock pulled Luke McGrath’s pass back for Carbery, Ringrose and finally Larmour to combine, giving Kearney enough space to score in the corner.

Somewhat similarly, after Carbery’s kicking game had contributed to that aforementioned pitch-length break out, another bout of scrum penalties and some battering through Ruddock, Kleyn, Toner et al, eventually ended with Carbery and Larmour again combining to put Conway over in the right corner.

Interestingly, in what was presumably a pre-ordained strategy, John Ryan replaced Jack McGrath at half-time, with Porter shifting across to loosehead. But the Italian scrum, improved by more experience in their front-row replacements, did manage one big shove on Porter’s side.

After the resumption, Ireland butchered a long range try after Carbery combined with Ringrose for the latter to break out. Unfortunately Luke McGrath slipped when heading for the posts, and Porter probably shouldn’t have opted for the pick and go after the supporting Herring was hauled down just short of the line. In any event, the pack mauled over from a lineout for Jordi Murphy to score.

The Italian defence was almost non-existent, but Ireland’s exit strategy of crosskicking to Conway led to Bisegni winning the ball and an extended period of Italian pressure, during which Carbery was stretchered off.

Good work by Ringrose, Murphy and Kearney forced a turnover, and a long, clever relieving kick by Jack Carty with his first touch. Soon after, with his first touch, Tadgh Beirne latched over the ball in customary fashion to win a trademark turnover penalty within a moment of replacing Ruddock.

Whereupon Marmion provided some energy off the bench when racing up to block down an attempted clearance by McKinley to gather and score, Carty hitting the upright with the kickable conversion.