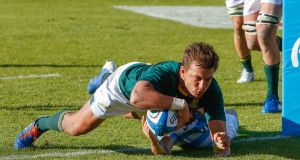 South Africa outhalf Handre Pollard scores one of his two tries in the Rugby Championship match against Argentina at the Ernesto Martearena stadium in Salta, Argentina. Photograph: Jan Touzeau/EPA

A Handre Pollard-inspired South Africa warmed up for the World Cup in superb style by beating Argentina 46-13 in the southern hemisphere’s Rugby Championship in Salta on Saturday to claim their first major international trophy in a decade.

There were also tries for hooker Bongi Mbonambi and wings Makazole Mapimpi and Cheslin Kolbe after Santiago Cordero had scored the only try for the Pumas in the second minute.

The emphatic win gave the unbeaten Springboks a bonus point and a total of 12 points from their three matches, four more than second-placed Australia who earlier on Saturday stunned reigning champions New Zealand 47-26 in Perth.

“It’s the first time in 10 years that South Africa has won the Rugby Championship or Tri-Nations and it’s a nice reward for all the hard work we’ve put in.

“It’s also a good thing for us going into the World Cup. It’s one step up, still a lot of work to be done but yah, it’s a good feeling.”

The Pumas, whose last Test win was against the Springboks in Mendoza in the 2018 championship, have now lost their last eight Test matches although close results against New Zealand and Australia had given them hopes of a winning chance in Salta.

Cordero’s early try from Nicolas Sanchez’s pinpoint crosskick to the corner raised those hopes higher but all Argentina had to show for their hard work from then on were six more points from the outhalf’s boot.

The South African victory was founded on brilliant defence, especially early in the second half when they would not yield to intense Pumas pressure near their line, and good counterattacking.

They built their game sensibly, kicking penalties when there was little to separate the teams in points in the first half when Pollard slotted his first four penalties.

An early try from Mbonambi, who was driven over the Pumas line by the Springbok maul and Pollard’s first with a break into space under the posts, gave South Africa a 24-13 half-time lead.

Pollard stretched the lead with a fifth penalty before Argentina enjoyed their longest spell of possession and control without managing to breach the Springbok line as a deserved second try went begging.

South Africa lost scrumhalf Faf de Klerk to the sin bin for repeated offsides during this spell but Pollard scored another try while his side were a man short before Mapimpi earned the bonus point and Kolbe secured it.

Pumas coach Mario Ledesma said that despite the disappointing results in the truncated championship, Argentina would not be distracted from their preparations for a tough World Cup pool that also includes England and France.

“It’s tough to find positives with this result but it was a good week,” Ledesma said.

“It hurts us all, in our country . . . but there’s still a month of work before the World Cup and we mustn’t lose sight of our focus.

“We’ll keep at the things we are working on. The scrum is something that needs work. Fitting in the players from abroad was a bigger challenge than we expected.”