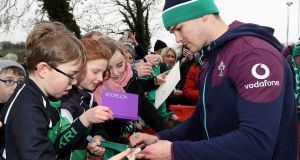 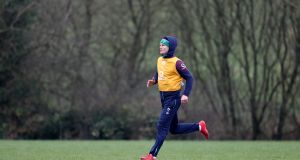 Johnny Sexton and Rob Kearney appear to be the only major injury concerns for Joe Schmidt and the Irish management a week out from the pivotal round three shoot-out with France at the Aviva Stadium next Saturday.

Both players sat out Friday’s main open training session at Monaghan RFC, and while the Irish head coach was confident that both would resume full training by next Tuesday, he was altogether more confident about the well-being of the fit-again Rory Best, Peter O’Mahony, Iain Henderson and Andrew Trimble, all of whom took a full part over the two days of training.

Of Sexton, who did some running and kicking on the back pitch as he continues his recovery from a calf injury, Schmidt said:

“He’s hitting all his markers. He ran well today. It’s an incremental thing, as long as you keep hitting your markers. So he did some high-speed running today, he’ll do some volume running over the weekend, and then he should be fit to go in and out of training on Monday and then train fully on Tuesday.”

“Those are the markers he’s got to hit and he’s hit them comfortably so far. We’re not trying to over-accelerate that, we’re being a little bit cautious and, therefore, we’ll know by Thursday. If he completes training on Tuesday, we know that he’s set to go.

Schmidt admitted that Sexton’s availability for the French games remains uncertain. “There always is,” he said, before adding: “There’s a small amount of uncertainty around Iain Henderson and Peter O’Mahony but now that they’ve trained fully and the nature of training today, we’d be really super confident that they are set to go. They both trained really well.

“Andrew Trimble trained really well today as well, so we are starting to get those guys back. Johnny is maybe three or four days behind them, that’s all. We’d be very hopeful that we’ll get that as well.”

Similarly Kearney was “hitting all his markers” after suffering an injury to his bicep in the latter stages of the record 63-10 win over Italy. “We’re probably quietly confident there more than overtly confident, but as long as he keeps going in the direction he’s going, we’d hope that he’ll take a full part in training on Tuesday. We’ll get confidence from that, he’ll get confidence from that and then we can roll into Thursday and into the match on Saturday, hopefully.

“He’s got a tendon injury just at the base of the bicep,” explained Schmidt, “so it’s one of those things that we’ve just got to see how it reacts to all the demands that he will have of his bicep.”

Schmidt added that Best, who was ruled out of the Italian game with a “stomach bug”, “was full of bounce. He didn’t have too much to say out there. I think he was just trying to get his breath, but it’s good to see him back and fully integrated into what was a fairly exhaustive training at times.”

As happened on the Monday after the Scottish game, Conor Murray also sat out training, but again Schmidt played down the significance of this.

“Conor accumulates a few things as time goes on. It’s not often that he gets through a game where he doesn’t get knocked off the ball, or as he reaches in to the get the ball that he doesn’t get someone coming through and making contact with him.

“We knew that today would be a little physical, the Under-20s take every opportunity to put it up to us!

“It was ideal for Conor to step out. I thought Kieran Marmion came on against Italy and did really well. He maintained the tempo and maybe even upped the tempo, because he’s so sharp. We wanted to integrate him a bit more today and it was the perfect opportunity to do that.”

With Marmion, Best, Henderson, O’Mahony, Sexton and Trimble in attendance, along with all bar Niall Scannell of the starting line-up in Rome, and Jack McGrath; all told, 21 players took part in the three day camp.

The camp assembled on Wednesday and trained on Thursday and Friday, despite the confidence engendered by the performance and win against Italy, Schmidt maintained that the mood was not that different within the squad.

“It’s been pretty focused. We tried to make Wednesday, when they first came in, reasonably light, just to ease them back in again having given them Monday and Tuesday off after travelling back Sunday.”

“I think you can’t keep people under pressure indefinitely, otherwise the valve’s got to be released somehow. Wednesday was light, Thursday was a little bit of technical stuff and today was trying to put a little bit of that into practice.”

“The mood in the camp is mostly based around how we’re training. We very quickly have to move past games, because we have to look at our next opponent and how we’re travelling.”

An estimated crowd of 2,500 attended the open session in what has become something of an annual road show, and Schmidt and the players clearly benefitted from the change of scenery.

“It always helps,” he said. “We have been incredibly enthusiastically welcomed here in Monaghan. We’ve had people coming in and out of the hotel, a great crowd here today. A crowd like that, it does help the enthusiasm of the players. It becomes a contagious environment, where their enthusiasm is reflected in how the players train.”

1 Garry Ringrose to stay with Leinster as he signs two-year central contract
2 Rory McIlroy admits Portrush nightmare was catalyst for his return to the top
3 Sky Sports customers set to save on bills until Premier League returns
4 ‘For 25 minutes I ran out of oxygen’: Pepe Reina on his coronavirus battle
5 World Rugby issues new guidelines on high tackles and shoulder charges
Real news has value SUBSCRIBE

Dr Claire Molloy: ‘It is a privileged place to be, on the frontline’ 06:00
Six Nations rugby needs to be protected for terrestrial TV 06:00
My favourite sporting moment: Game, set and couch as Borg takes down McEnroe 06:00
Garry Ringrose to stay with Leinster as he signs two-year central contract 00:00
Rory McIlroy admits Portrush nightmare was catalyst for his return to the top 21:00
Here is your handy guide to sport on television this week