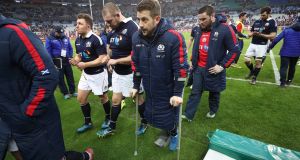 Scotland captain Greg Laidlaw will miss the rest of the Six Nations with an ankle injury. Photograph: Billy Stickland/Inpho

Scotland skipper Greig Laidlaw has been ruled out for the rest of the Six Nations, the Scottish Rugby Union have announced.

The Gloucester scrum-half suffered an ankle injury just before half-time as the Dark Blues lost 22-16 to France in Paris in Saturday.

He left the Stade de France on crutches and was sent back to the Kingsholm Stadium on Monday to be assessed by his club medics.

But Scots head coach Vern Cotter has now been given the bad news that Laidlaw will miss the remainder of the tournament.

It is a considerable blow for a side who have come to rely on Laidlaw, not only for his leadership skills but also his goal-kicking abilities. Ali Price took over at nine at the weekend and looks likely to keep the jersey when Scotland welcome Wales to Murrayfield next Saturday.

However, Cotter must now decide who will take over the capitaincy duties.

Flanker John Barclay took over the armband when Laidlaw limped off against Les Bleus, but was soon himself replaced after suffering a head knock.

Jonny Gray became the Scots’ third skipper of the day when Barclay was replaced and has long been tipped as a future national team captain.

A statement from the SRU said: “A scan undertaken at his club, Gloucester, confirmed the clinical suspicion that the 58-times capped scrum-half sustained ligament damage midway through the first half.

“The extent of the damage is such that he will take no further part in the current championship.

“Laidlaw will see a specialist later in the week to determine the best course of management and estimated time out of the sport.”