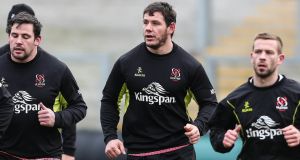 It’s been a busy week in Belfast with the announcement that Jono Gibbes and Dwayne Peel will join the coaching ticket, a long-awaited and outstanding debut for former Springbok international Marcel Coetzee and a victory against Edinburgh.

Scrumhalf Ruan Pienaar is back in an Ulster jersey for the first time since damaging a knee against Leinster on New Year’s Eve.

Irish internationals Tommy Bowe, Luke Marshall and Craig Gilroy, who scored a hat-trick of tries in Rome, also return to the backline as the home side look to clamber past the Glasgow Warriors, one place above them in the league standings.

Last weekend’s victory over Edinburgh also marked the return of Peter Nelson after over a year out with a foot injury in the unfamiliar position of outhalf; he acquitted himself capably and to some extent luxuriated in the post-match bumps and bruises.

He said: “I was very excited to get back after that length of time. I suppose there were a few nerves as well but going straight in at 10, there was no time to think about it. You’re straight into it and I think it was a big help for me.

“I was a bit stiff and sore but I suppose that is to be expected after 14 months out and, to be honest, after any game you have that. I was just delighted to get out there and I’ll take the bumps and bruises at this stage.”

There was much to admire in Ulster’s first half performance against Edinburgh, with Olding particularly conspicuous, but the second 40-minutes was pockmarked by self-doubt as the Edinburgh muscled their way back into the match.

Glasgow won’t allow Ulster any such latitude this week. South African Brandon Thomson makes his debut at fullback, Mark Bennett is in the centre having been released by Scotland, Peter Horne is back at outhalf following injury and the team also contains Italian openside flanker Simone Favaro.

The visitors are missing a chunk of their first-choice players, making it an opportune time to face Glasgow provided Ulster can get the integrity of their performance right; for 80-minutes though.

1 As news gets better, can the pull of The Field be resisted?
2 Ken Early: Liverpool fans, Bamber Gascoigne and a close shave in Istanbul
3 Tiger Woods and Peyton Manning hold their nerve in $20m Covid-19 charity match
4 Sideline Cut: Vignette shows why Bird is the true shark in The Last Dance
5 George Kruis leaves the door open as he prepares to depart Saracens
Real news has value SUBSCRIBE

Resisting the pull of The Field, Tiger Woods proves fitness in Covid-19 charity match 07:55
Tiger Woods and Peyton Manning hold their nerve in $20m Covid-19 charity match 07:10
Argentina rugby great Hugo Porta continues to give back to his beloved game 07:00
George Kruis leaves the door open as he prepares to depart Saracens 06:35
TV View: Not every day a Tesco delivery disrupts a Bundesliga broadcast 06:30
Here is your handy guide to sport on television this week