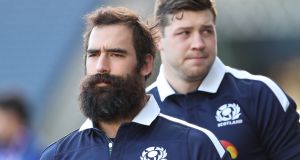 Scotland’s Six Nations campaign has suffered a second major blow in three days after Josh Strauss was ruled out of the competition.

The Glasgow number eight suffered a kidney injury against France on Sunday and the Scottish Rugby Union has confirmed he will take no further part in the tournament.

It was announced earlier this week that captain Greig Laidlaw’s tournament had been ended by an ankle injury.

An SRU statement revealed 30-year-old Strauss had taken a blow to his flank during Scotland’s 22-16 defeat.

It continued: “After completing the match, he was scanned in Paris. Both the scan, and the player, were reviewed at Spire Murrayfield Hospital back in Scotland, where the full extent of the injury was confirmed.

“Strauss will now return to his club Glasgow Warriors for further care and a review of the injury will be scheduled in approximately six weeks’ time.”

Head coach Vern Cotter refused to use a string of injuries during the Paris loss as an excuse, but the home side came from behind to win as they dominated the final 20 minutes.

And the bruising encounter looks set to have a lasting impact on a campaign that started so promisingly with victory over Ireland.

The Scots missed Laidlaw’s experience, leadership and talent after he went off inside 25 minutes and Strauss was arguably their top performer on the day. The South African-born forward recorded 16 carries and made 47 metres in a determined display.

Another number eight option, Ryan Wilson, missed the trip to Paris after dropping out of the Scotland back row with an elbow infection. Cotter also has Edinburgh loose forward Cornell du Preez in his squad but the South African-born 25-year-old is uncapped.

John Heslin strikes at the death to see Westmeath past Clare 17:35
Man United find respite in the mud as they hit Tranmere for six 17:32
Laois stage stunning comeback to draw with Roscommon 17:23
Longford deservedly take the points against Louth 16:34
Tipperary and Down share spoils in Division Three opener 16:29
Here is your handy guide to sport on television this week