Pool A: Samoa compromised by low funding and a player drain 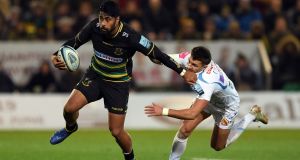 The news that Toulouse’s Joe Tekori has retired from international rugby to remain with the French club, in a bid to presumably extend his playing career rather than travel to the World Cup, is a classic example of a serious and compromising issue that the Pacific Island countries face in being denied some of their best players. The squad received a €54,000 donation from the Samoan public; funds raised in a 10-hour telethon. However while the financial carrot of European club rugby is too much for some players to resist, others are entirely committed to Manu Samoa - such as winger Belgium Tuatagaloa, who is currently without a contract and without a day job in order to be able to represent his country in Japan. His side beat Germany in a two-leg playoff to qualify for the World Cup finals. They have had a mixed preparation, beating Tonga but losing to the USA and Fiji in the Pacific Nations Cup. They will offer physicalty, flare and mighty hits.

Steve Jackson is a former New Zealand Maori representative and played for Tasman, Auckland, North Harbour and Southland, where he was captain. He was assistant coach at Tasman and Counties-Manukau before securing his first head coaching role at North Harbour, leading them to the Championship win which saw them promoted to the Premiership. He was an assistant coach with the Blues when he got the Samoan position last year.

Chris Vui was born in Auckland and played Under-20 international rugby for New Zealand before switching allegiance to Samoa. The 26-year-old moved to England where he joined the Worcester Warriors and then switched to the Bristol Bears in 2019. The backrow forward made 16 appearances for Bristol under coach Pat Lam during last season’s English Premiership campaign.

Samoa will bring a serious power game to the table in Japan, and 28-year-old prop Michael Alaalatoa is an intriguing inclusion in their final 31-man squad. The brother of Allan Alaalatoa - who is 25-years-old and has more than 30 caps for the Wallabies - he made his Manu Samoa debut against a New Zealand Heartland XV in August, scoring a brace of tries. The Crusaders prop could have played for three countries - Australia, Samoa and New Zealand - but has opted to follow in the footsteps of his father Vili in Japan, who represented Samoa at the 1991 tournament.. Arguably their best player is fullback Ahsee Tuala, a lethal, try scoring presence, who plays with the Northampton Saints.

It spawned the gallows humour observation from one Welsh player that ‘thank god we weren’t playing the whole of Samoa.’ Western Samoa beat Wales 16-13 at the Arms Park in a pool match during the 1991 World Cup. The Samoan team contained many luminaries including Pat Lam, Brian Lima, former All Black Frank Bunce, Stephen Bachop who went on to play for New Zealand subsequently and also Blackrock College, Mat Keenan of London Irish and legendary prop and captain Peter Fatialofa.

They qualified for the World Cup by beating Germany over two legs comfortably in Apia but with 14-minutes remaining in Heidelberg in the second leg they trailed 28-21 before pulling away to win 42-28. Compromised by a lack of funds, player withdrawals and the sacking of head coach Fuimaono Titimaea Tafua, they have some excellent ball players and will profit from the time spent together at the tournament but lack the obvious quality of previous squads.