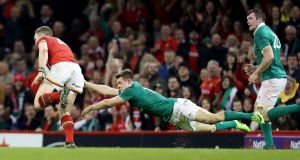 Ireland’s Garry Ringrose attempts to tackle George North of Wales during the defeat at the Principality Stadium in 2017. Photograph: Dan Sheridan/Inpho

It’s a relatively minor glitch in the gilded Joe Schmidt era. It only amounts to two defeats.

But in his six seasons as head coach, during which time Ireland have beaten every nation they’ve encountered and all of them on their own terrain save for New Zealand, they have not beaten Wales in the Six Nations in Cardiff.

There was a World Cup warm-up win there in August 2015, but in the two Six Nations meetings there under his watch, Ireland lost 23-16 in March 2015 and by 22-9 two seasons ago. The first effectively denied Ireland a Grand Slam, although it begot Super Saturday a week later when they won the title with their 40-10 win over Scotland in Murrayfield.

Going into that Cardiff game, Ireland had won 11 and drawn one of their previous 14 visits to Cardiff, and had beaten Italy, France and England to extend their then winning run to 10.

But Wayne Barnes initially pinged Ireland off the park at the breakdown, and after Leigh Halfpenny kicked the home side into an early 12-0 lead, Wales withstood incessant second half pressure, including one extended passage of 32 phases.

Two years ago, in round four again and with Barnes once more the referee, Wales came into the game on the back of a home defeat by England and a 29-13 loss against Scotland, but two George North tries steered the home side to another win which ended Ireland’s title hopes. A week later they denied England a Grand Slam.

“Yeah, it would be nice to tick it off,” admitted Schmidt in the aftermath of Ireland’s 26-14 win over France.

“But it’s not so much the venue. I know that the home crowd get right behind the Welsh team there. I also know that we’ll have lots of travelling support and that they’ll be very vocal so we look forward to getting that support.

“I know last year that we kind of had a performance that was very up and down against Wales. When it was up, I thought it was super, and when it was down they got some tries that were frustrating and were well earned by them, but it was frustrating in that we didn’t cut them off.

“You’d be amazed how little it has to do with what it means to me. It’s in the players’ hands, it’s their domain. My job is just trying to ensure that they feel they’re well prepared, that they feel that they understand how Wales are going to turn up and defend or attack and work with the other coaching staff to try to best manage the playing group between now and then, because that’s a tricky thing in itself in a slightly condensed week.”

The six-day turnaround might give Schmidt and co more cause for freshening up the side, although the way he name-checked other players that might come into the mix suggested changes will be minimal, save for the anticipated return of Rob Kearney, and pending the wellbeing of Josh van der Flier. Significantly or not, the first of those was Dan Leavy, although he hasn’t played since December 22nd.

“There are a couple of guys who have been in and around the squad. Obviously Dan Leavy was up in Belfast, Rob Kearney should be right to train on Tuesday. Sean O’Brien, Sean Cronin, Rob Herring, there are a number of guys who we’ll get back and have a look at how they all shape up.

“Andrew Conway came in late but whether we have a look at freshening that up . . . and front-row wise, Andrew Porter was with us in the warm-up. Tadhg Beirne, we’ll see how he is on Tuesday. There are those sorts of options that we’ll just have a look at.”

Asked specifically about Beirne, who had two hugely successful years at the Scarlets, Schmidt said: “He was pretty sore Thursday but our expectation is that he will be training fully on Tuesday and, if he is, he is another guy who will be back in the mix for this weekend coming.”

The feel good factor was back at the Aviva Stadium on Sunday, but Schmidt countered: “There are some things that we need to do a little bit better. There are some things that looked bang on target but to replicate those, it’s like anything, if you become distracted at all then there’s a risk that they won’t be replicated the following time you get out there and play.

“We’ve got to stay as focused as we can on the things we didn’t do so well, obviously those two tries at the end, they’re a frustration.

“On the other hand, that intensity we brought, to replicate that, they’re human beings, they’re not a regular machine so you’ve to try to make sure that you’re in the right frame of mind and you’re ready to go.

While he reckoned Sunday’s game was the most dominant 50-minute performance Ireland had produced in the Six Nations at home in his time at the helm, Schmidt admitted that would be insufficient against a side who are seeking a Grand Slam on home soil and a 14th successive win.

“I don’t think 50 minutes will win in Cardiff, full stop. I think you’ve got to put 80 minutes together in Cardiff. We have to extend that high performance period right through the game.”

The Welsh defence, which has conceded less than 15 points per game is, Schmidt admitted, the toughest nut to crack in the tournament, although he clearly felt Gregor Townsend had a point when suggesting post-match that Wales were in yellow-card territory in the second half.

“They make things challenging. Certainly, they rack up a penalty count when they are down there, at the same time. So if we can keep that sort of pressure on, like Scotland did, and we’re not chasing the game at the time, like Scotland were, then you put yourself in a more positive position to get the result.”