Furlong braced for a battle with ‘physical specimen’ Bamba 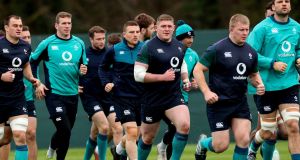 The video is from 2018 and French tighthead prop Demba Bamba playing in the Under-20 World Cup. The headline translation is “The Incredible performance of Bamba against the Baby Blacks”. A comment below is “A block of granite.”

The granite metaphor is wide of the mark. Bamba is a prop who can step and drive. His power and footwork and willingness to be an inside channel receiver from the scrumhalf are what could make him a challenge for the Irish defence on Sunday.

For Tadhg Furlong, there is part of him curious and part wary of the young prop who has moved seamlessly from age-group rugby into a starting player for Jacques Brunel. He was the prop that stole the show at the Under 20 World Cup and he’ll be 21-years-old on St Patrick’s Day.

A French national judo champion at 14, Bamba also plays handball so he runs like a balanced backrow and along with natural power, his 6ft 1in motor purrs. Furlong has taken notice. But he’s also a little bit ho-hum.

“If you look at him, I suppose he is a really good ball player, he is quite dynamic. I think he did a bit of judo back in his day. His footwork, his change of direction into contact obviously is very strong and winning that initial sort of first contact.

“It’s important that when you do try tackle him, you either go low and get your bite or it’s a two-man hit because he is a hard man to stop.”

Furlong could be talking about himself. Scrummaging aside, the Irish tighthead plays an active carrying and offloading game. Worrying about Bamba isn’t really something he see does him any favours. But players always tend to hold cautionary respect.

Bamba is not old enough to a be a colossus in the French front row. But he’s young enough to feature as a menace in a team that likes to run ball. Ireland may not specifically target Bamba but they will police him and test him in the set piece.

“He’s done pretty well so far,” adds Furlong. “He looks like he knows what he is about, what he wants in the scrum. But look, at the same time, he still is a young prop. He’s a physical specimen of a man. But we just try to look after our own stuff.”

It has been this week’s theme in camp. Taking care of your own stuff. Ireland have stripped everything back to a place where they are focused on diligence and getting everything correct, every accuracy bull’s-eye, every kink ironed out. From that they hope consistency will come. It has before.

Furlong is no different about not fluffing lines. But there is also a sense that this week there has been a rediscovery of some of the aspects of play that has made Ireland a feared team. It has required no great changes or paradigm shifts. Just players minding their own stuff.

“We felt like we had a little bit of momentum and then pass quality might go down, or, there’s a knock on or there’s a turnover on the ground,” says Furlong. “We’re just lacking that bit of accuracy. Where we hold onto the ball for three or four more phases we have teams under the pump. It’s just about putting what we’re doing in training and bringing that accuracy into games, where we’re making unusual errors for us.”

In making those errors Ireland have invited teams into matches, supplied them with access. Sunday will be about stifling, cutting off French entry points, closing doors, offering cul-de-sacs, denying the young set in which Brunel has so heavily invested: Bamba, Antoine Dupont, Romain Ntamack the oxygen to strut around Aviva Stadium as if it were an Under-20 World Cup.

“He is a good player,” says Furlong of Bamba. “He is playing well. He is probably one of their young fellas coming through on that sort of crest of a wave, winning the World Cup. Those younger players coming through at Toulouse that are paying really well at the minute, they have a fair few of those in the squad. Credit to them.”

Furlong then departs, leaving the room with the feeling that an Irish backlash might have just walked out the door.