Ian McKinley in line to make Italy debut against Fiji 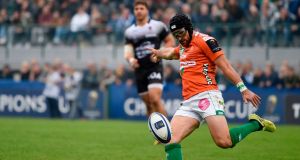 Ian McKinley is in line to make his debut for Italy in Saturday’s Test match against Fiji in Sicily. Photograph: Miguel Medina/AFP/Getty Images

Irishman Ian McKinley is in line to make his debut in Italy’s opening autumn international against Fiji on Saturday in Sicily.

The 27-year-old former Leinster outhalf has been named as a replacement by Conor O’Shea six years after losing the sight in his left eye after an accident while playing a club game for UCD.

McKinley was forced to retire in 2011 but made a comeback in 2014 in Italian club rugby, wearing specially manufactured goggles.

The Dubliner progressed to Viadana and on to Zebre before establishing himself at Treviso and became eligible through residency to play for the Azzurri at the beginning of the year.

O’Shea hands a debut to New Zealand-born fullback Jayden Hayward for the game in Catania.

Hayward, 30, moved to Treviso after a spell with the Western Force in Australia and also qualifies to play for Italy through residency.

Wing Mattia Bellini makes his return after 18 months out with a knee ligament injury while uncapped Giovanni Licata and Matteo Minozzi get a chance for a first cap off the bench.

Captain Sergio Parisse, veteran of 126 caps, returns after sitting out the tour in June where Italy played Tests against the Australia, Scotland and Fiji.

Italy were beaten 22-19 by Fiji in their meeting in Suva.