Director General Páraic Duffy: ‘They haven’t succeeded and I feel sorry for them’

World Rugby chairman Bill Beaumont announces that France have been awarded the hosting of the 2023 World Cup. Video: World Rugby 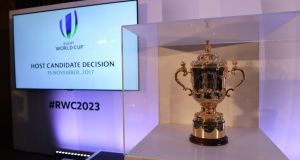 The 2023 Rugby World Cup has been awarded to France, ahead of Ireland and South Africa. Photograph: Billy Stickland/Inpho

The GAA has expressed its disappointment over the failure of the Irish bid to capture the 2023 Rugby World Cup, which has been awarded to France. The association had been involved in the campaign through making a number of its venues available to support the proposal.

“It’s very disappointing,” said Director General Páraic Duffy on hearing the news. “Given the evaluation report a few weeks ago it was always going to be difficult to get enough support. The oversight committee worked very hard over the last few weeks to reverse the position but they haven’t succeeded and I feel sorry for them.

“They had worked very hard over a number of years - I know at first hand the quality of the bid they had put together and the work that was put in so I share their disappointment.”

The association’s involvement with the bid goes back to 2012 when Liam O’Neill was president. IRFU CEO Philip Browne met him and Duffy to say they were considering bidding for the 2023 World Cup, something that wouldn’t be feasible unless the GAA supported it by making some of its venues available.

O’Neill’s and Duffy’s initial reaction was favourable and Central Council unanimously supported it and the following spring, the GAA annual congress amended the Official Guide in order to endorse the offer of venues.

Now that the bid has fallen, the GAA lose the opportunity to benefit from public funds to improve a number of their venues in order to bring them up to the required standard for the tournament.

Government support for the redevelopment of Cork’s Páirc Uí Chaoimh has already been disbursed even though part of it was based on supporting the bid for RWC 2023.