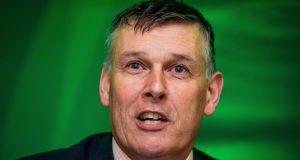 IRFU chief executive Philip Browne has stressed that fulfilling Ireland’s rearranged 2020 Six Nations games at home to Italy and away to France at the end of October is imperative for the Union’s finances.

While resigned to the Italian match on October 24th being played behind closed doors, which would effectively cost the IRFU an estimated €2.5 million in gate receipts, the deferred payments from the completion of the Six Nations could amount to €4 million.

“It is obviously a help but we need to be careful we don’t jump the gun because the matches have not happened yet. The key thing is to get those two Six Nations games played off because the balance [of what we are owed] from central funds is dependent on us completing the Six Nations championship for 2020.

“And then this autumn mini-tournament is really important as well, as the southern hemisphere countries are not in a position to travel,” added Browne in reference to the proposed eight-team Autumn Nations Cup in November and December, involving the six nations plus Georgia and Fiji. “We need some revenues to meet our commitments to the broadcasters, sponsors and all the rest of it.

“At this point in time, the great shame is that it does not look like we will have spectators at those matches unless something changes in the next couple of weeks.”

Browne’s comments followed his appearance in front of the the Oireachtas Covid-19 Response Committee on Friday morning, when he said Irish rugby’s losses this year due to Covid-19 pandemic were forecasted to be in excess of €30 million and if games continued to be played behind closed doors in 2021 it could threaten the existence of professional rugby in Ireland, as well as elsewhere.

“Our projections through to summer next year include borrowings. The reality is in March of this year we had a cash surplus – our cash position was positive €28 million . We are projecting by end of June/July, if we do nothing, and continue to have to play behind closed doors, we would be looking to have to borrow to the tune of €11 million. And with a cash burn across the four provinces, you can see pretty quickly where our financial and cash position is going.”

At the very least, the prospect of further salary cuts and even redundancies could not be ruled out.

“Unfortunately we may have to cut costs if we don’t get people through the turnstiles and revenues do not recover and that is going to impact ultimately on our ability to maintain the structures and personnel that we have put in place. It is a fact of life that you cannot spend more than you earn.

“The worst case scenario if this goes on and on and on – which I don’t believe it will because I believe we will see some turnaround next year in terms of vaccines – but if this goes on indefinitely, you have to question whether the professional game is sustainable at all.

“That would not be unique to Ireland. There would be a similar situation across all rugby nations. We need the revenues to sustain what we are doing.”

1 Johnny Sexton aware of how Ireland can offer fans an escape
2 Gerry Thornley: After 32 weeks the Six Nations is back up for grabs
3 Extremes of sweet and sour for Solskjaer as Man United show signs of revival
4 Stockdale and Ringrose on board with expansive Irish game plan
5 Here is your handy guide to sport on television this week
Real news has value SUBSCRIBE