Gerry Thornley and Gavin Cummiskey look ahead to Ireland's first match of the 2020 Six Nations against Scotland and predict a change in style of play under new head coach Andy Farrell. 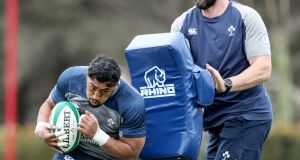 Bundee Aki has held off the challenge of a fit-again Robbie Henshaw and will partner Garry Ringrose in midfield against Scotland. Photograph: Dan Sheridan/Inpho

Age: 22
Height: 5’ 10”
Weight: 87kg (13st, 7lbs)
Caps: 21
Ireland’s new era begins with a new first-choice fullback in situ. Larmour has shaken off a foot injury and can transfer his fine form from a blue jersey into the green one.

Age: 25
Height: 6’3”
Weight: 94kg (14st, 9lbs)
Caps: 28
Ireland’s midfield linchpin, Ringrose holds the backline together on both sides of the ball. He often provides the greatest attacking spark and reads the game brilliantly in defence.

Age: 29
Height: 5’10”
Weight: 92kg (14st, 5lbs)
Caps: 23
A lucrative new contract highlights his ongoing importance to Ireland, as does his selection ahead of a fit Robbie Henshaw. Will provide the usual steel and silk in midfield.

Age: 23
Height: 6’3”
Weight: 103kg (16st, 3lbs)
Caps: 25
Stockdale’s return to form in the white of Ulster has been enjoyable and timely. A more expansive style from Ireland could see him return to the unstoppable heights of 2018.

Age: 34
Height: 6’2”
Weight: 92kg (14st, 5lbs)
Caps: 88
The talismanic Sexton lines out for the first time since injuring his knee playing for Leinster in December, and he will lead the side out as the new permanent captain.

Age: 30
Height: 6’2”
Weight: 93kg (14st, 7lbs
Caps: 78
Andy Farrell has retained faith in Murray ahead of the in-form John Cooney. He will be determined to show exactly why against Scotland and rubbish any suggestion his powers are on the wane.

Age: 32
Height: 6’1”
Weight: 117kg (18st, 4lbs)
Caps: 95
Healy could become Ireland’s latest centurion if he appears in all five of Ireland’s fixtures, and will provide the usual set-piece security as well as physicality around the pitch.

Age: 29
Height: 6’1”
Weight: 102kg (16st)
Caps: 8
Herring has kept the prodigious Rónan Kelleher at bay, for now. He becomes Ireland’s first number two after Rory Best and will need to perform to keep his starting role.

Age: 27
Height: 6’
Weight: 122kg (19st, 3lbs)
Caps: 41
Andrew Porter would be a starter for most teams but Furlong is immovable from this Ireland side. Scotland will still be scarred from his rampaging performance at the World Cup.

Age: 23
Height: 6’8”
Weight: 107kg (16st, 9lbs)
Caps: 23
The captaincy will have to wait for now but Ryan is quickly growing into Ireland’s most influential player. A freak of nature on both sides of the ball, he is also a born leader.

Age: 29
Height: 6’1”
Weight: 114kg (17st, 11lbs)
Caps: 38
The backrow has been reshuffled and Farrell has decided Ireland can’t head into the Six Nations without the numbers Stander produces in attack and defence, so he’s moved across to number six.