Ireland U-20s need to sharpen up defence against Scotland 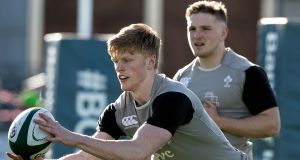 Ireland coach Noel McNamara has shuffled his resources to give players an opportunity to lay down a marker for places, not only in the final match of the Six Nations against England in Coventry this day week, but also the World Championship in France this summer.

Flanker Joe Dunleavy, who started his rugby as a six-year-old with the Letterkenny minis in Donegal, has been given a debut, while there is an element of squad rotation in terms of the other changes. Mark Keane and Angus Kernohan make their first starts for the team while captain Tommy O’Brien reverts to the number 13 jersey.

Hugh O’Sullivan, James French and Tom O’Toole are promoted from the bench following the 41-38 defeat to Wales, while Matthew Dalton, back from Ulster senior duty, replaces the injured Cormac Daly in the secondrow. A late decision will be made on whether Diarmuid Barron (ill) or Eoghan Clarke (back strain) will act as reserve hooker.

Scotland make a couple of changes to the team that beat England 24-17 at Myreside last time out to record a stunning first victory in this season’s tournament; it’s a record they share with their hosts.

Some of Ireland’s attacking play has been very impressive, while there have been some standout contributions, notably from tonight’s starting team O’Brien, Ronan Kelleher, Angus Curtis and Jack O’Sullivan, who excelled against the Welsh.

Defence has been a real issue – not so much system as individual lapses – and many of Ireland’s problems in the tournament to date have been self-inflicted. A sharper focus and better concentration without reneging on the attacking brio they have demonstrated would edge the home side towards that more rounded performance that would allow them a second tournament victory.