Speargate 13 years on: O’Driscoll and Umaga bury the hatchet 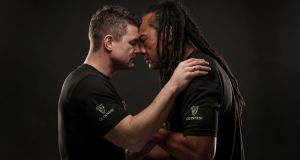 Tana Umaga and Brian O’Driscoll perform a Maori Hongi at a media event ahead of Ireland’s Guinness Series meeting with the All Blacks. Photo: Dan Sheridan/Inpho

Rarely, if ever, has there been such a bitter and controversial fallout from an incident on a rugby field in the history of the sport. The act of foul play which sparked the furore was compounded by the way the Lions PR machine went into overdrive in the days that followed, and the way it raised the All Blacks hackles. It even got its own name: Speargate.

When New Zealand’s Tana Umaga and Keven Mealamu lifted and speared Brian O’Driscoll into the ground in the opening moments of the first Test in 2005, the consequences were practically volcanic. The Lions’ captain’s tour was over. He was wheeled out for press conferences. The All Blacks bristled, holding an extraordinarily defiant press conference of their own with the entire squad flanking Umaga and Graham Henry.

It remains possibly the only occasion in the history of sport where the winning team were in vengeful mode a week later, and at the full-time whistle Umaga shouted ‘f*** you” into a pitchside camera, which ought not to have been that close to him at such a moment.

Thirteen years ago, you could never have imagined watching and listening to O’Driscoll and Umaga chat amiably alongside each other as they finally drew a line in the sand publicly, but 13 years on, there they were in one of the rooms of Wilson Hartnell PR agency in Ely Place doing exactly that. Admittedly this was part of a Guinness-sponsored promotion, and the black stuff can have that kind of effect.

“We were just chatting about it the other night,” said O’Driscoll. “I get asked about it all the time. In any Q&A over the last 13 years, it is probably the one question I can guarantee. It was talked about last year because it was that 12-year (Lions) cycle. We parked it a long time ago.

“It was one of those things. Was it unfortunate? Yeah. Should you have dealt with it slightly differently? Yeah. You’ve got to move on. You can’t bring those sorts of things through life. Listen, we’re able to have a laugh and take the piss about it now, properly.

“Sometimes you don’t get an opportunity to meet up with people in a controlled environment. We see each other at events here and there and have a quick word. Actually, to have a get together and chew the fat and properly get to talk and not feel scared by it is refreshing and, I hope, it’s dead after this,” said O’Driscoll with a laugh.

Revealing they had dinner together one night last week, Umaga added: “I think that was the key thing for us, just to have time together. You pass each other very fleetingly at matches and engagements, yet to really sit down and really, like you said, chew the fat around that was great. That’s just part of this game. We can’t change the past. It is something that whenever I do something people ask about and it is well settled between us. Hopefully this will really put it behind people and we will make peace with it now.”

According to O’Driscoll, the pair drew a line in the sand “organically” over the years. Admitting that it should have been “nipped in the bud” sooner, “it dragged on and there are some things you wish you could go back and change”, he cited a golf event last summer between ex-Northern Hemisphere and ex-Southern Hemisphere players.

“It was like being back in school with your mates because we were all the same mentality and we had such a laugh. I think ex-players, when you park the international stuff, you are able to get on all the more because that adversarial aspect is not there anymore.”

That will not apply for the protagonists this weekend of course.

Both men acknowledged it was the stand-out fixture of the month, and while O’Driscoll believes “what happens up front will ultimately dictate how the game pans out,” he added: “The whole thing for Ireland is shutting down Beauden Barrett’s space. Very few ‘10s’ can do what he can do with ball in hand. He’s such a threat.

“The Lions managed to do that and he didn’t manage to look like the magician he’s looked in other games, so that’s definitely a massive focus. You’ve got to have him have one of his poorer games. If you do that, you’ve got a shot.

“The second thing is the strike rate and the space that Reiko Ioane gets. He gets opportunist scores, so he’s got to have his opportunities limited as well. But that happens by shutting down the guy inside and not giving him the time and space to pull the trigger.”

Umaga concurred. “That’s what we’re trying to do, free up space for Beauden but if we can’t do that it does affect us. So we’ve got to try to flip it around and try to put pressure on them around those areas, not to give their outside backs the space that they have.”

The All Blacks will be every bit as motivated by the Chicago defeat as Ireland will be by the subsequent loss in the Aviva stadium and Umaga, unsurprisingly, subscribes to the theory that the wound was more a scar than a nick.

“You learn a lot from the scars that you get. If you think it was a nick, you can get complacent and see it as just an anomaly. If the scar is deep enough, you get to learn a lot more out of it. For us, the first time that it’s happened scars you deeply when you are part of the side that has created history, not the history that you want. For me, I would say it would scar them deeply. They want to make sure that they can put things right in their minds.”

This tour is important for the continuing development of players such as Karl Tu’inukuafe and, accordingly, Umaga maintains the All Blacks “are not where they want to be, but you don’t want to be where you want to be a year before the World Cup.”

Umaga was as influential as anybody in reviving Bundee Aki’s career when coming across him as a teller in a bank and persuading him to start playing against with Counties Manakau, when Umaga was their coach.

“It’s been great from my perspective to watch Bundee develop as a player and take the opportunities that have been afforded him. As a young man when I first came across him, he was at a bit of a crossroads in terms of what he wanted to do with his life. And he got involved in rugby, we asked him to get back involved and he has really put in some great shifts into where he is now compared to where he was then. It’s a great story. I’m really proud to see what he has achieved. I had dinner with him last night which he paid for so I’m very fortunate about that!”