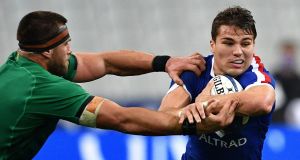 Antoine Dupont has become the first ever Frenchman to be named the Six Nations Player of the Championship.

Ireland’s CJ Stander was among the shortlist of six nominees. The other nominees were England’s Ben Youngs and Maro Itoje, and French duo Grégory Alldritt and Romain Ntamack.

However the 23-year-old France scrumhalf came out on top - winning 46 per cent of the public vote. No scrumhalf made more than Dupont’s 249 metres with ball in hand, while his 54 kicks for 1,543 metres (both Championship highs) proved there is another facet to his game outside his electric running in the open field. Dupont’s Championship-high 12 offloads showcased his ability to keep the ball alive. He got one try and four try assists.

Dupont’s French team, rejuvenated under the guidance of Fabien Galthié, narrowly missing out on the title to England on points difference.

An inaugural Women’s Six Nations Player of the Championship award has also been revealed, with England centre Emily Scarratt winning the vote.