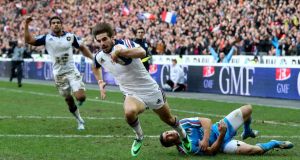 Eight days after edging past England in their Six Nations opener, France made it two from two at the Stade de France as they scored three second-half tries to hammer Italy 30-10, small revenge for the defeat they suffered in Rome a year ago.

After an untidy first half which saw France take a 9-3 led though the boot of scrum-half Jean-Marc Doussain, the genie was let out of the bottle as Louis Picamoles and Wesley Fofana both crossed for tries within the first five minutes of the second half. They were rapidly followed by Hugo Bonneval who matched his father Eric’s feat of scoring on his international debut.

Italy responded with a late try for Tommasso Iannone but it made no difference to the outcome. Both sides finished the match with 14 men as Rabah Slimani and Michele Rizzo were shown red cards in the last 10 minutes.

Doussain missed a couple of straightforward penalties before finding his range in the 27th minute to put the French ahead. But the lead lasted just two minutes as Gonzalo Garcia, one of five changes from the side that lost narrowly in Cardiff in the opening round, levelled. The Zebre centre, though, missed a simple kick to put the Italians ahead while Doussain found his range with two more to give France a small but deserved lead at the break.

The number eight Picamoles got the French moving early in the half, driving off the back of a maul and bullying his way through two tackles to touch down. It went to the video which showed momentum had carried the Toulouse man through. Two minutes later Fofana pounced on a ball which squirted out of the side of a ruck. He sprinted down the touchline from the 10-metre line for the second try,

Before the Italians had time to catch their breath they were regrouping under the posts once again. Fofana again with the pick up and break, a lovely pass over the top to Yoann Huget who drew the tackle by the touchline and passed inside for Bonneval to cross for the try.