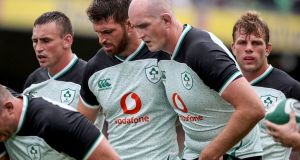 Jean Kleyn got the nod ahead of Devin Toner as a specialist tighthead secondrow. Photograph: Dan Sheridan/Inpho

Joe Schmidt’s reasoning for Devin Toner’s exclusion from Ireland’s 31-man World Cup squad is based primarily on scrum power and a belief that Iain Henderson can effectively call the lineout.

The power surge that comes from Jean Kleyn is not expected to be used in Ireland’s crucial Pool A matches against Scotland and Japan. Toner’s removal indicates the secondrow partnership moving forward will be James Ryan and Henderson.

“I’ve coached Dev for 10 years,” Schmidt told RTÉ. “He’s not just a lineout champion for us, he’s such a good player and an absolutely quality person. That was an incredibly tough conversation yesterday [Sunday].

“Jean Kleyn, we probably don’t have a specialist tighthead secondrow. I’ve talked about the balance that we’re looking for across that squad of 31. Jean Kleyn fitted that. Tadhg Beirne gives you the versatility of both a secondrow and he can play in the backrow. He’s teamed up really well with Kleyn for Munster this year. And he also gives you the threat over the ball like a six or a seven would.”

This rationale appears to focus on Pool A games against Russia (October 3rd) and Samoa (October 12th) with Schmidt seemingly picking a squad to fill specific on-field roles.

Kleyn, Beirne and Ruddock are set to fill the second team.

“You’ve got James Ryan who made an immediate impression coming back into the side and Iain Henderson who’s promised so much and performed at times incredibly well for us at times. We’re going to need [Henderson] to very much put his best foot forward.”

This is a warning to Henderson who, with Ryan’s assistance, is now charged with calling the lineout.

The other big cuts – Will Addison, Kieran Marmion, Jordi Murphy and Jack McGrath – were always at risk despite Schmidt attempts to mould each one of them into a regular starter.

Schmidt sees Ringrose as cover at “outhalf, fullback and wing”, another theory that enables him to go with Chris Farrell, as one of three “pure centres” ahead of Addison.

Ringrose has never played fullback or outhalf at any grade.

Andrew Conway’s ability to make attacking reads in the heat of battle secured his selection.

“Unfortunately for Will, it’s all just come a little bit too late for him,” Schmidt explained. “He had a calf niggle when he came back in for pre-season.”

On the possibility of dropping Rory Best, from the starting XV or as the Ireland captain at the tournament, Schmidt said: “I think there is always doubt in your mind when you start a Rugby World Cup build-up because people have to get through the period of hard work. It is testing for everybody, including Rory. I felt he worked really hard, it wasn’t a great day against England but, without taking all the responsibility off the players I knew we were heavy legged.

“I still feel Rory did well at Twickenham despite the lineout not functioning properly. In Cardiff he led the scrum and made a dozen tackles in 20 minutes. That’s not a guy who is miles away from being at his best.”

A specialist blindside, Rhys Ruddock has been selected ahead of the versatile Murphy for his leadership qualities. The injury prone Ruddock remains a gamble but the 28-year-old led a callow Ireland squad through New Jersey and Japan in the summer of 2017 when the established leaders were on the Lions tour of New Zealand. If not for a constant stream of knocks Ruddock would have significantly more than the 22 caps he has won since making his debut as a teenager against Australia in 2010.

Murphy has also been one of Schmidt’s preferred men since being capped off the bench against England in 2014. The switch from Dublin to Belfast last season and subsequent up surge in form playing mostly at openside seemed to guarantee his place in the World Cup squad.

Not so, but Murphy looks almost certain to travel at some stage as an injury replacement.

Kleyn has effectively muscled Toner out of the squad. It’s unclear if the 33-year-old suffered due to a troublesome ankle – the first real injury in his career – which disrupted his season. Either way, it is a cruel call for the 6’ 10” Meath man.

Kleyn qualified on residency grounds last month and while the South African scrummed well against Italy he was as anonymous in the physical exchanges against Maro Itoje and George Kruis at Twickenham as he was for Munster against the same Saracens duo in the Champions Cup semi-final.

Even at 35, Racing 92’s Donnacha Ryan is never anonymous when battling the best locks on the planet.

Ruddock and Kleyn could be the rocks Ireland build a pack around for Russia and Samoa, which enables Schmidt to rest his frontliners ahead of the quarter-final against New Zealand or the Springboks.

The hookers were nailed on after Seán Cronin saw off Rob Herring, who had a badly timed back spasm against Italy in August. Best silenced doubters in Cardiff but the starting hooker slot remains a debate between Niall Scannell and the 119 times capped leader.

Jack McGrath’s fall from grace while surprising has been visible; capped three times off the bench for the British and Irish Lions against the All Blacks in 2017, the Ulster-bound loosehead is so clearly third, possibly even fourth choice after outstanding displays by Dave Kilcoyne and Andrew Porter against Wales.

McGrath’s experience will be missed but the form call has been made.

The dropping of Kieran Marmion – who Schmidt sat beside for the team announcement last Thursday and trusted to start the victory over the All Blacks last November – is rough but Luke McGrath’s defence and general improvements altered the coach’s pecking order.

Joey Carbery will travel as the third scrumhalf but Conor Murray’s injury profile this past year suggests that Marmion could be on a flight to Tokyo before the knockout stages.

Jack Carty, having earned his spot over Ross Byrne and John Cooney, might only see minutes off the bench against Russia and Samoa as Carbery will surely need time at 10.

The Munster outhalf remains unavailable for selection this weekend due to an ankle problem.

Conway goes on form with Jordan Larmour’s uncertain defence on the wing offset by his devastating attacking ability. Still, this feels like the toughest call. Addison was primed to break into the team, where he could bring an extra creative spark, but Schmidt has chosen a different road.