Greg McWilliams: The Irishman with a mission to make US rugby better 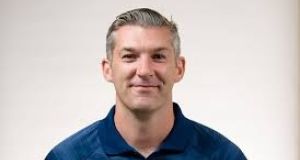 Greg McWilliams: “Every coach I come across over here I tell them to forget systems; get your kids passing the ball and learn how to step off both feet. Skills, skills, skills”

“I wouldn’t say I’m pitting myself against Joe Schmidt. I’ll contribute to a staff that is planning to make our team competitive against Ireland. They are such an efficient side. We want to be competitive, that’s our goal.”

Last June the Americans were certainly competitive against Scotland, winning 30-29 in Houston.

“Joe has had a big influence on how I view the game,” said the former St Michael’s and Monkstown FC outhalf. “During the World Cup preparation in 2014 he was so kind, gave up his time, flew me back from Marcoussis to join the international camp in Carton House to go through our attacking structure.”

After that tournament McWilliams followed his clearest career path; director of rugby at Yale University, initiating an impressive journey into the US Eagles set-up that is in Chicago this week.

“I certainly didn’t think in 2014, when I took the job in Yale that I’d be going back to Dublin in 2018 as a coach of the US national team that plays Ireland.”

How did the 40-year-old get this far so fast?

“I wasn’t a professional rugby player. I didn’t go down that route for 12 years before retiring and going into coaching. I was an average AIL player. Played a bit of Irish colleges but, to be honest, I wasn’t very good.”

At age 21 McWilliams decided to become a career coach but to make that a reality the late Noel Turley told him to get a H-Dip.

“’What, Noel, I don’t want to become a teacher!’ He told me to trust him. Glad I did. Got the H-Dip and went into the classroom where I realised how important the environment was to become a professional coach, because in both professions to you need to be able to communicate with people, get them into a groove of learning, and being challenged to get better every single day.

“Best thing I ever did was become a secondary school teacher [in St Michael’s]. I wouldn’t have become a rugby coach otherwise.”

Since 2014, McWilliams has worked under Robbie Deans on a Barbarians tour, John Mitchell around Ireland’s 2016 visit to New Jersey, Joe Schmidt for that valuable Carton House tutorial, England’s new attack coach Scott Wisemantel at a clinic in South Africa, while Scott Robertson spent two weeks with the budding McWilliams family on campus this summer and he reports regularly into current US head coach Gary Gold.

“All of them have a common trait,” he said. “They find a way of delivering clarity to players in a really efficient manner. They just have different personalities and sell it differently.

“Rugby is a very simple game made difficult by coaches. We don’t need to reinvent the wheel. There is a brilliant article that Birch [Bernard Jackman] shared with me about four years ago by Michael Boyle called There is a reason there is a box. The key to coaching is understanding the box and becoming a master of what’s inside it.”

Spend too much time learning tricks of the trade you may never learn the trade.

“I want to make US rugby better. Every coach I come across over here I tell them to forget systems; get your kids passing the ball and learn how to step off both feet. Skills, skills, skills. Watch Cathal Marsh playing in New York, I tell them, ball in both hands.”

“The US will be training in Stradbrook which is where I coached AJ and Ian Madigan and lots of really good players. It’s an exciting trip for me and my family but also for our players – to get this challenge with the year ahead.”

“Archie and Lana Rose are full on so rather than leaving Sarah on her own with the twins in New Haven I dropped them all back to Dublin to stay in her folk’s house which is right beside my parents. I’ll stay an extra week for the kids Christening, back to America for about 10 days and then back for Christmas.”

January brings the formal countdown to a lovely World Cup pool that includes Springboks, All Blacks and Italy.

It seems unending. On Saturday the Eagles swoop upon Soldier Field for a quasi-test match against the New Zealand Maori (before Ireland play Italy). Take a breath and it’s off to San Sebastián, when their European-based heavies bar the injured AJ MacGinty link into the squad to face Samoa.

Next stop Bucharest for Romania before any young Irish coach’s ideal examination on November 24th.

“AJ missing is not unfortunate it’s shit, but I’d rather him miss these games than the World Cup.”

Samu Manoa remains the most famous exile, but Paul Lasike, the freakish Harlequins centre, via the NFL, is another essential component if any damage is to be done at the Aviva stadium, while the Irish-born Americans – Newcastle prop Paul Mullen, flanker John Quill and hooker Dylan Fawsitt - will hardly be found wanting.

Post-World Cup, a coaching gig in Europe would work, but Yale and US rugby like what they have, with a constant stream of analysis being done, day and night, hour upon hour.

“I’m in my little bubble in Connecticut. Get up early, feed the twins, saunter into the office until training and afterwards do video work for USA until late. And repeat. I really love working in this environment.”