Conor Murray under no illusions about the size of Wales challenge 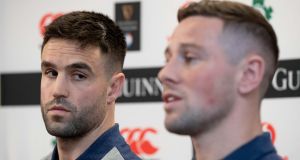 Conor Murray is under no illusions as to the size of the task facing Ireland against Wales. Photograph: Morgan Treacy/Inpho

Don’t let the complexion of the win colour judgement was Conor Murray’s message at the Irish team base in Sports Campus Ireland on Monday.

The Irish scrumhalf insists Ireland did enough things well to take confidence from the opening Six Nations Championship victory over Scotland, as last year’s champions Wales prepare to visit Dublin at the weekend.

Murray added that Scotland came to play rugby and had a point to prove after their poor showing at the Rugby World Cup, while Ireland showed flashes of what they were capable of producing.

“What we’ve done in training so far, what we showed glimpses of... let’s not forget, I think Scotland came here and played really well. They did,” said Murray.

“In the World Cup, we dominated them really well and got away from them in the game but they came here with a point to prove and were really fired up for it. They came really close to snatching a win. You’ve to give them credit too, I thought they played really well.”

Like Irish coach Andy Farrell did after the match, Murray also preferred to focus on what Ireland did well in their first outing, and following meetings he is now enthused about the visit of new Welsh coach Wayne Pivac and his team.

“From what we’ve been talking about in meetings and in training, I’m really excited about this weekend,” said the Irish scrumhalf. “There is definitely more than enough belief.”

“We did well both sides of the ball, especially in defence late in the game and after a couple of mistakes. Getting back, winning turnovers. There’s a huge amount of positives from that game.”

There is no doubting the dimensions of the Welsh threat after they cruised past Italy in their opening game, with Murray noting they pose a greater danger to Ireland with their speed and size.

“They’ve got speed, size, they can play in a variety of different ways,” said Murray.

“They’re Grand Slam champions, they’ll be coming here looking to get a result. It’s going to be a tough one.

“Wales are going to be really tough, they’ve played the same way for a long time now but there’s going to be a few differences. But, their kicking game and the pressure they put on you with their kick-chase is going to make life pretty difficult,” he added.

“That’s an area we’re going to improve on, our kicking and our contestable kicks and exits. We came under a bit of pressure there at the weekend, our game-breakers - their backline is always a handful.”

The Irish team to face Wales will be named on Tuesday with Garry Ringrose ruled out Caelan Doris and Dave Kilcoyne going through HIA protocols.

Tadhg Furlong is trying to shake off a calf muscle problem, while Keith Earls is back in contention following a knee issue.

1 Jack Nicklaus’ Trump endorsement leads to avalanche of dismay
2 Six Nations - France v Ireland: Kick-off time, TV details, permutations, team news and more
3 Ireland, France or England? Who needs what to win the 2020 Six Nations
4 England lay down marker for Ireland after bonus point win in Rome
5 World Handicap System: What is it? How does it work? Will my handicap change?
Real news has value SUBSCRIBE

England lay down marker for Ireland after bonus point win in Rome 19:09
Dublin return from the dead to give Kilkenny a scare in Croke Park thriller 18:57
James McClean nets for Stoke as they beat Rotherham 18:35
Impressive Waterford power past Cork to reach Munster final 18:20
Dan Martin steals another Vuelta advantage atop La Farrapona 18:04
Crossword Get access to over 6,000 interactive crosswords