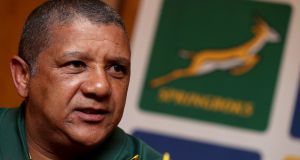 South Africa coach Allister Coetzee: “We need to adapt and there will be challenges Saturday.” Photograph: Dan Sheridan/Inpho

Continuity was the buzz word as Springbok coach Allister Coetzee named a side with just three changes from the one that lost to New Zealand by a point in the final match in the Rugby Championship.

Coetzee didn’t sound like an under-pressure coach as he put Stormers’ Damian de Allende at inside centre and changed both props with Coenie Oosthuizen at tighthead and Tendai Mtawarira on the other.

To lay down a challenge, as it were, for Irish tighthead Tadgh Furlong, “Beast” Mtawarira will extend his record as the most capped Springbok prop to 96. Only Victor Matfield and John Smit are more capped as forwards.

“I think continuity has been key for us this year with this group,” said Coetzee. “We’ve been together now for close to eight months and I’ve seen the results in the way this team has grown together as a group in how we train and the way we have played through the championship.”

Bundee Aki was one of the Irish players Coetzee knew little about apart from his explosive power, although the Springbok coach did remember him from his days in Super Rugby.

“He’s done well for Connacht,” said Coetzee. “I haven’t had a long look at him. He’s a quality player. I can remember when he played for the Chiefs. He’s quite a big explosive player, quality player. We’ll make sure our defence is solid this weekend.”

Coetzee put the Ireland team at a level with those sides they played against in the Rugby Championship: New Zealand, Australia and Argentina.

But his expectation is the Springbok team that lost by a point to the All Blacks will be the one to step on the Aviva pitch, not the shattered ‘Bok side that were beaten 57-0 in Auckland.

“Look they [Ireland] are ahead of us in terms of world ranking,” he said. “Last year, to be honest, I think we were lucky to have won the series in South Africa. They are a well-coached team and have world-class players in the side.”

Coetzee also promised better-conditioned players to face Ireland as the strength and conditioning coaches have addressed the physical side of preparation in a fundamental way.

Traditionally dog-eared squads have arrived for the series beaten up and flagging from a competitive Rugby Championship. That aspect, says Coetzee, has been totally changed with players in the various franchises now dovetailing with the national team needs in terms of the physical requirements at international level. This is not, he promises, an end of the year squad just holding together.

“Yes a fundamental shift from the strength and conditioning guys,” said Coetzee. “In the past it [conditioning] was in silos. What worked for one franchise might not be priority for the next franchise.

“For the national team we needed to identify and tell the franchises this is what we need and this is what it takes to be effective at international rugby. You cannot play Test match rugby if you are not aerobically fit and strong and powerful.

“We had training camps throughout the year and that gave us a chance to see each individual and see what was required to keep them in a right frame of mind. I am very happy with the conditioning.”

It is an inexperienced backline with inside centre de Allende’s 27 caps and outside centre Jesse Kriel’s 24 caps making them the two most experienced players.

Coetzee has also opted to stick with Elton Jantjies to face Johnny Sexton at outhalf with Handre Pollard on the bench. Pollard last started for the ‘Boks at the 2015 Rugby World Cup in England before he missed the whole of 2016 and most of 2017 with injury.

The forwards, however, are laced with experience from Mtawarira to lock and captain Eben Etzebeth, his secondrow partner Lood de Jager and Bath’s Francois Louw in the backrow. Although based outside South Africa Louw’s 54 caps bring him over the 30-cap limit to qualify him for selection.

“We can’t come here with a southern hemisphere mindset and try to be as effective,” said Coetzee. “We spoke about that whole thing. The way we train has really improved out fitness levels. We need to adapt and there will be challenges Saturday.”