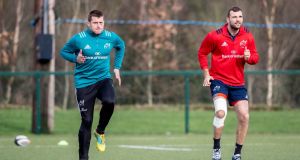 Joe Schmidt’s second row options for the remainder of the Six Nations have increased with Tadhg Beirne linking up with the Irish squad at Carton House after recovering from a knee injury picked up last month.

And centre Chris Farrell, taken off as a precaution early in Munster’s easy win over the Kings on Friday evening after suffering another knee injury, has rejoined the Irish squad while awaiting results on the scale of his latest knee injury.

Munster coach Johann van Graan said he was hopeful the centre will be fine after twisting his knee but they needed to examine it.

“It’s a shame. He will be further assessed by our medical team and the national team’s medical team. We don’t foresee it to be serious but we have to be sure. We will just wait for further information.

“He twisted and turned and got a knock on the outside, he twisted on the inside. We will just have to wait and see. The positive is he ran off the field. But I am not a knee specialist so I am not going to speculate.”

Van Graan confirmed that Beirne has fully recovered from the knee injury picked up last month against Exeter Chiefs and is raring to go as he bids to add to his four Irish caps.

“He completed his rehab last week with our medical team and Joe pulled him in today to go into the squad there,” added van Graan.

John Ryan, Andrew Conway and Niall Scannell, all who started in the 43-0 win over the Kings, have also been returned to Irish camp.

Billy Holland, who won his only Irish cap against Canada in 2016 and who was added the squad as Devin Toner joined the list of injured second rows, is remaining with Munster this week as they prepare for a trip to Wales to take on the Ospreys on Friday.

Van Graan has his own second row concerns to worry about after fellow South African Jean Kleyn was injured late in the rout of the Kings which them finish with 14 players having earlier emptied the bench.

“He just got a bit of a knock there as they scored that try and reached out, so we will just manage him through the week,” added van Graan.

“We don’t foresee it to be serious. We will take our time through the week, but I have done it a few times, especially with games that we are in front, just take a player off, don’t risk it and finish the game with 14 players.”

A remarkable feature of Munster’s seven-try win was that they did not concede a single penalty – the Kings were pinged 15 times by new Italian referee Andrea Pairdi – in the game and van Graan praised his side’s discipline.

“That hasn’t happened very often in a game of rugby. It’s brilliant if you don’t concede a penalty. To be fair to the referee he handled the game really well. It was his first game. He didn’t give a lot of technical penalties away. Most of them were for foul play.

“We kept our heads. We are proud of our tackling technique, especially on the 4G again because it’s so fast you can get it wrong a few times. The biggest take away from our side is the five points. Discipline wise we did quite well.”