Sean Fitzpatrick: Ireland could topple All Blacks at RWC

‘Ireland have real depth and to win World Cups, you need depth,’ former All Black said 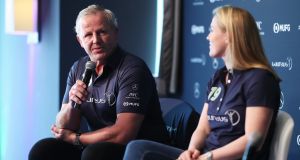 New Zealand are overwhelming favourites to clinch a third successive crown in Japan later this year but the natural order was disturbed by Ireland clinching a famous win over the Kiwis in Dublin last November.

Defeat for New Zealand came just a week after they were pushed all the way by England, who have beaten Ireland and France in the Six Nations recently.

Fitzpatrick expects both northern hemisphere sides as well as Wales — currently on an 11-match winning sequence — to shine on the global stage.

But he thinks no top-tier nation can be ruled out of contention at a tournament where none of them can boast home advantage.

The 1987 World Cup winner told Press Association Sport: “No disrespect to Japan because they can beat the big boys as we saw in 2015 (when they defeated South Africa) but it’s the first neutral World Cup in terms of the home advantage.

“The All Blacks are the defending champions, they probably are still the team to beat and I say that every World Cup.

“I always thought that the major challenge would come from the northern hemisphere and I still think that after what happened in the autumn and what’s happening in the Six Nations.

“England have really gone to another level, Ireland have real depth and to win World Cups, you need depth, and Ireland’s got that without question and so have England.

“I just think that England and especially Ireland have got our number in terms of the way we play the game. They play the game similar to us.

“You throw those two in there along with Wales, who are on the most unbelievable winning streak at the moment, and then you’ve got South Africa and you can never write Australia off. It’s going to be hugely, hugely competitive.”

Fitzpatrick was speaking in Monaco in his role as the chairman of the Laureus World Sports Academy, a collection of sporting talent who volunteer to support the organisation’s Sport for Good message.

Indian sport for development programme Yuwa, which uses football to empower young girls in rural Jharkhand, was announced as the Sport for Good winners, with four of its participants among those to collect the honour.

Fitzpatrick added: “That really brings it home, they’re in awe of being here.

“It’s probably more inspirational for us because they do things that, in terms of sport as a power for change, that is one of the best examples that you can see.

“Football has given those girls a dream. You and I dream every day, they never, ever thought they would do anything else than be a child bride, be illiterate, so they never dreamt.”

*The Laureus World Sports Awards celebrate the most remarkable men and women from the world of sport along with their achievements from the previous calendar year. The Awards also showcase the work of Laureus Sport for Good, a charity which uses the power of sport to end violence, discrimination and disadvantage.