Rugby Stats: The gifted France No 9 showed the vast array of his skills against Italy 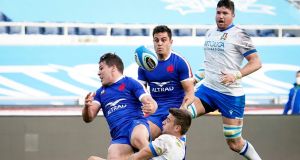 France scrumhalf Antoine Dupont offloads to Arthur Vincent as he is tackled by Luca Sperandio of Italy during the Six Nations game at the Stadio Olimpico. Photograph: Dave Winter/Inpho

@Dupont9A this guy is on another level! No one is near him atm . He’s the point of difference for both his club and country. He’s helping me look at parts of my game to improve.”#respect #9gang – Aaron Smith (@Te_Nug) on Twitter

Antoine Dupont’s stock, blue chip, received a further buy-in on Tuesday, another ringing endorsement, this time from New Zealand scrumhalf Aaron Smith who was unequivocal in replying to a question as to the identity of the best player in world rugby at the moment.

His response brooks very little argument. The All Black, acknowledged as the standout performer in his position globally for the majority of his career to date, was effusive in his praise of the 24-year-old French No 9.

No matter what the medium – France 2 produced footage of him succeeding at the crossbar challenge on his first go at training much to the delight of teammates Teddy Thomas and Damian Penaud – Dupont continues to capture hearts and minds of even the most discerning supporter, French or otherwise.

Last weekend he proved to be France’s alchemist in Rome; one try and four try assists in a continuation of the form he’s demonstrated both for Toulouse and the national side. Dupont’s performance reinforced that truly great players think quickly but never rush. No matter what pressure he was under, he invariably chose the right option and executed perfectly.

There were layers to his performance, those that were eye-catching and obvious and others which required a closer look at the evidence. When Thomas made the break in the build-up the France’s opening try scored by Dylan Cretin, Dupont was initially the closest support player but allowed Arthur Vincent to take the wing’s offload; the scrumhalf bided time and continued to scan while also throwing a quick look over his shoulder to pick the next thrust.

When Dupont runs from distance to a ruck, he invariably approaches along the centre line of the breakdown, giving him a panoramic view and the facility to go either side; it keeps the fringe defenders guessing. By choosing that route he also disappears briefly from the opposition radar, obscured by his forwards, only to reappear at speed, looking for a mismatch or to create kinks in the opposition’s human chain.

The running lines of his team-mates offer several distractions. Dupont also provides a kicking option, a responsibility he took on nine times during the game and in a variety of styles: a beautifully weighted poke through for Gael Fickou’s try, reacting to a shout from his centre. He’s happy to thump the ball long 40 or 50 metres from the base of a ruck or mix it up with the occasional box-kick.

When the opposition are in possession from phase play the French scrumhalf adopts a roving commission. He is not obliged to defend around the ruck area or be on hand if his team forces a turnover. The French like to mix it up, outhalf Mathieu Jalibert is often to be found in the backfield outside of set-piece defence, fullback Brice Dulin defends on the blindside wing, Fickou and Dupont were twice used in a lineout.

In the first half in Rome, Dupont largely defended in the midfield, more often than not operating as a lone ‘shooter’, coming out of the defensive line at speed to pressurise or collar the passer/receiver. He accomplished it beautifully in the build-up to Vincent’s try.

He was first onto a misplaced Italian pass that went to ground, fly-hacked through and ran a support line to take a pass, one-handed, and give another, a no-look offload to Vincent. The scrumhalf’s lines of running are correctly celebrated, an uncanny nous in anticipating linebreaks and being on hand to link or ultimately profit.

When Thomas breached the Italian defence outside the 13 channel he has players outside but chose to reward Dupont who had glided up on his inside. On another occasion the scrumhalf reacted swiftly to Jalibert’s break, took the pass and then gave a scoring one to Thomas. He also works hard in the backfield; snuffed out a fine break by Paolo Garbisi and covered a couple of dinked kicks.

As if that wasn’t enough he claimed a couple of restarts. From the first he spun away, dummied and made 15 metres while the second was a simple catch and pass. France used his replacement Baptiste Serin – he came on after 58 minutes but not before Dupont had done enough to win the man-of-the-match award – in a more orthodox fashion.

Ireland have managed to curtail Dupont’s influence in two of the three matches against France since his debut but last time out at the Stade de France, the scrumhalf demonstrated the sort of quality that has his rivals purring and a repeat of that influence will go a long way to shaping the outcome of Sunday’s game at the Aviva stadium.

3 Gordon D’Arcy: No Irish player has inspired in the Six Nations like Seán O’Brien used to