Allister Coetzee: ‘We let ourselves and support back home down’

South Africa head coach Allister Coetzee says there are "no positives" to take from his side's record 38-3 defeat to Ireland. 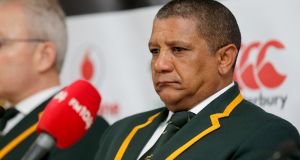 Allister Coetzee cannot explain what is happening. It all seems so cruel, Springbok rugby is utterly lost. South Africa’s head coach – presumably not for much longer – was unable to put any sense on this 38-3 thumping by Ireland.

The recent 57-0 destruction in Albany was framed as an aberration. It was the All Blacks, it happens. But to the regular Springboks fan peering into this nightmare, this record defeat in Dublin, the misery runs deep.

“It is difficult to explain,” Coetzee begins. “No positives from our side to be honest. We let ourselves down, we let our support back home down.

“Look, the Albany thing was tough but we came back and I’m sure we will come with three games left on tour. We just have to fight our way back.”

But from where? They are rudderless.

South Africa need Rassie Erasmus and Jacques Nienaber back in the saddle as soon as this tour ends if there is to be any chance of rebuilding the Rainbow Nation before Japan 2019.

Eben Etzebeth is considered the best lock in the world. Eddie Jones says so and nobody disagrees. Due to the mass exodus to European clubs, his rise to the Springbok captaincy has happened ahead of time. The man, who should be building towards legendary status, must shoulder the most searching questions imaginable for a young South African rugby player.

Eben, when you were a boy the Springboks were so far ahead of Ireland to be out of sight, how difficult is it to be captain during these days when Ireland have caught up and moved past South Africa?

“It’s a tough day,” said Etzebeth. “We have no excuses. We are going to have to rectify this. Make plans for the Test next weekend.”

The man sits there stunned. But they must pack up and journey to Paris. Really they are going nowhere. It makes sense why South Africa went so hard to bring Erasmus home ahead of time. It makes sense why World Rugby want to send a World Cup down there in 2023. See 57-0. See 38-3. See a rugby nation on its knees.

“I cannot just see anything like this changing in a short space of time,” said Coetzee before checking himself: “We have to come out and improve. To learn from this one.”