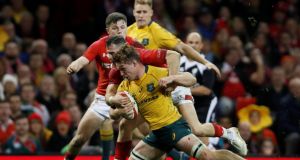 Australia’s Michael Hooper scores his side’s third try in the match against Wales at the Principality Stadium in Cardiff. Photograph: Paul Childs/Action Images via Reuters

Wales suffered a 13th successive defeat against Australia as the Wallabies claimed a hard-fought 29-21 victory in Cardiff.

First-half tries by forwards Tatafu Polota-Nau, Aidan Coleman and captain Michael Hooper underpinned Australia’s win as they warmed up impressively for a Twickenham appointment with England next Saturday.

Wales had their moments in attack – wing Steff Evans scored an impressive try and substitute Hallam Amos claimed a late consolation score – but defensive hesitancy was punished by an Australian side high on confidence following their downing of world champions New Zealand three weeks ago.

The selection of two midfield playmakers in Dan Biggar and Owen Williams, and the subsequent shift of tactical emphasis, worked more often than not, but Wales were far more stressed in defence, and Australia did not require a second invitation to capitalise as they made it nine years unbeaten against their hosts.

And there was a potential major injury blow for Wales on the stroke of full-time when their star Lions centre Jonathan Davies was helped off injured.

Australia made the initial running, dominating possession and territory, but Wales had a half-chance in the sixth minute when Liam Williams charged down Hodge’s attempted clearance before the ball bounced safely into Foley’s hands and he cleared from inside his 22.

Wales went ahead through a Halfpenny penalty three minutes later, yet Australia looked more assured then their opponents with ball in hand and they opened their points account after wing Marika Koroibete ran powerfully from his own half.

Australia then took play to within striking distance of Wales’ line before relentlessly driving a lineout and Polota-Nau, who will join Aviva Premiership club Leicester next month, emerged with the ball from underneath his fellow forwards.

Foley converted, but Wales responded impressively when centre Jonathan Davies broke clear, then scrumhalf Gareth Davies exploited space and the ball was moved at pace before Halfpenny delivered a final pass to Evans, who finished impressively on his home Test debut.

Halfpenny converted from the touchline, and Wales had scored more points inside the opening quarter then they managed in the whole game when Australia visited Cardiff 12 months ago. The lead, though, lasted barely five minutes.

For all of Evans’s attacking excellence, Australia looked to challenge him defensively, and he appeared out of position as Hodge almost grabbed Foley’s well-placed kick, and when Wales struggled to clear, the Wallabies recycled possession expertly and Coleman crashed over.

Foley’s conversion made it 14-10 before the less-heralded kicking expertise of Hodge took centre-stage as he landed a superb 45-metre penalty from wide out before Halfpenny cancelled it out from much shorter range.

Australia looked for another score as half-time approached, and it duly arrived when the Wallabies patiently built attacking phases and Wales ran out of defensive numbers as Hooper touched down to secure a nine-point interval advantage.

Halfpenny opened the second half scoring by completing his penalty hat-trick, and Wales enjoyed a strong third quarter in terms of territory, keeping Australia pinned deep before the fullback saw a penalty attempt from halfway drop agonisingly short.

Wales then conceded a fourth try after Evans, who was struggling after being on the receiving end of a hefty collision moments earlier, coughed up possession, and Beale picked it up before sprinting 60 metres unopposed to effectively end the contest.

Hooper collected a yellow card 12 minutes from time, and Gatland made four substitutions either side of the Wallabies captain’s departure, including a Wales debut for Ospreys centre Owen Watkin.

Further new caps arrived off the bench in Dragons prop Leon Brown and Ospreys flanker Sam Cross, a Sevens specialist who made just his third appearance of professional 15-a-side rugby, but Australia had done enough to seal the deal.