‘He’s a great ballplayer, he’s got a good work-rate and he’s still young so there’s a lot more to come from him’

Ireland out half Jonathan Sexton is fully fit and ready for his Six Nations campaign since taking over from Rory Best as team captain. 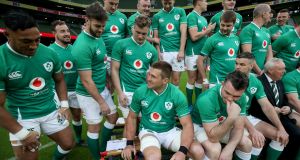 Although it has meant him reverting to blindside flanker, where he actually began his Irish career, CJ Stander has revealed that he could see Caelan Doris laying claims to the Irish number eight jersey from a long way back.

“I actually just met his dad around seven months ago and he told me his son was coming through. I was joking about it that he’s going to take my spot. I said to him then just to make sure that he enjoys it and trains hard, like anyone else.”

“He’s a great ballplayer, he’s got a good work-rate and he’s still young so there’s a lot more to come from him, I’d say,” admitted the 29-year-old Stander.

The Mayo-born Doris, just 21, makes his debut against Scotland in Ireland’s opening 2020 Guinness Six Nations game against Scotland at the Aviva Stadium tomorrow (kick-off 4.45pm) and Stander added: “If I talk to him before the game, I’ll tell him to go out there and do what he’s done to get here, enjoy it. It’s the Six Nations and it’s special.”

Stander made his debut on the corresponding opening weekend of the 2016 Six Nations in the draw with Wales, and actually earned his first 14 caps at number six before assuming his more customary role anchoring the scrum in the final game of the 2017 Six Nations when Ireland denied England a second Grand Slam in a row.

He has started 18 of his last 19 Tests starts at number eight, but the emergence of Doris has seen Stander revert to his original Test position.

“It’s a place I’m familiar with in this squad, it’s not really a big switch for me, it’s just a number change. I think my job there is to just make sure I get into space a little bit and work with the boys around me, give them an easier job.”

Stander said there was “good energy” at the first captain’s run under Andy Farrell and clearly sees Saturday’s game as the turning of a new page.

“We’ve got Andy and a few new coaches and a few new players, so there is a bit of a change-up but I think we as a team need to move on from that and step up from the World Cup, and make sure we go out there and enjoy ourselves, raise to the challenge, and play the way we know. I think just playing into space and playing the ball a bit more. We can use our energy around the pitch.”

One of the more subtle changes has seen Simon Easterby assume the defence coaching role, although presumably with input from Farrell, and while also working with the forwards alongside new scrum coach John Fogarty.

Discussing the remodeled backrow Easterby, who played on the blindside for Ireland 67 times, said: “I think guys have to be pretty flexible. In the World Cup, we saw guys moving around a bit, Pete [O’Mahony] moved to seven, and we have to have that flexibility in that starting pack and guys coming off the bench.

“Caelan comes in for a well-deserved start and we’ve reshuffled a little bit but we have the added advantage of having the experience of Pete on the bench to cover across the backrow. Every team has to be adaptable, particularly in the backrow, but it doesn’t change things much.”

Ireland go into the game with both of their most experienced lineout operators and callers, O’Mahony and Devin Toner, on the bench alongside the 21-year-old uncapped hooker Rónan Kelleher.

Along with James Ryan and Iain Henderson, Doris will also provide an option for Rob Herring, making his Six Nations debut, but this too means some re-jigging.

“Pete has a world-class ability in the air and there’s not many better but we have to be able to adapt to the guys we’re using,” said Easterby. “We have the ability to challenge, we’re good on the floor, and making sure we’re not giving them the opportunity to challenge us. I think that’s something our groups have been working really well with.

“The new hookers coming in, it’s been a good challenge for them working with different guys, the callers and guys who are being lifted. We’re going to come up against a side tomorrow who will try to put a lot of pressure on us, they’ve got some good guys in the air. We have to be able to manage that and take the ball where we can, but we also have the advantage of experience off the bench in Dev and Peter.”

Henderson called the lineouts at the World Cup and has been doing so for Ulster, while Ryan has done so once for Ireland, against Wales, but Easterby would not divulge who will be making the calls on Saturday.

“Tomorrow will be a bit mixed, so we’ll have a bit of a moving feast. It won’t just be one person, we’re going to make sure we try to share the load. To be fair, the guys have been interchanging since we’ve come together and hopefully tomorrow you’ll see the return on some of the good work we’ve been doing.”

“The lads have been on top of it, they’ve been impressive certainly in the lineout group that have worked really hard together and taken some of the good stuff they’ve worked on in the provinces and implementing that into what we’ve done in the last few days.”