Beauty in the eye of the beholder for Andy Farrell

Ireland coach: ‘I thought we thoroughly deserved the win. It was a tough old Test match’

Ireland head coach Andy Farrell has hailed Johnny Sexton's "magnificent effort" after the outhalf returned from injury to captain the side and score all of Ireland's points in a 19-12 win over Scotland in the Six Nations. Video: David Dunne 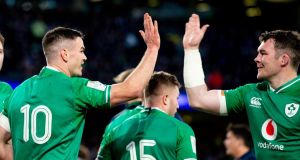 A bit of relief. At least that how it seemed after the frothy Scotland finish. First match done, a 19-12 win and the Grand Slam and Triple Crown are still alive. But neither Irish coach Andy Farrell nor outhalf Johnny Sexton were interested in the elegance or beauty of Ireland’s win over Scotland.

And relief, well that didn’t really come into an upbeat Farrell’s thinking at all. He alone perhaps.

“I wouldn’t say relief. I’d say delighted to get the win,” said the Irish coach after his first match as head coach and officially now a step away from the Schmidt era.

“I thought we thoroughly deserved the win. It was a tough old Test match. It was very attritional. I thought the Scotland forwards were excellent. Defensively they were hitting hard. We knew what a threat they would be with ball in hand. We had to fight and dig deep plenty of times. Our performance, you could sum it up in the last five minutes.

“We asked the lads during the week to stand for something and I think you could easily see the true grit, especially those tight five boys,” added Farrell humming with pride. “We had a couple of injuries nice and early. That makes it a little tricky as far as substitutes are concerned. They were leading the way in those last five minutes and I thought they were outstanding.”

His captain Sexton called up memories of last year and how after Ireland had capitulated to England in the first match of the series saw two possible titles vanish. Ireland lost 20-32 in Aviva Stadium with tries from Jonny May and Henry Slade and a lot of kicking for Farrell’s son Owen.

“I was delighted to get a win,” said the Irish captain. “The first game of this tournament is all about winning. Talk about the first game last year against England here. Triple Crown gone. Grand Slam gone. An uphill battle to even try and win a championship. We are alive in everything and that’s where we want to be .

“It’s always difficult to come together and have a perfect game,” added Sexton. “I thought we saw glimpses of what we can do and some of the ideas that we had. We just could never get those two scores clear. We had chances to do it. If you go two scores clear it allows you to really open up try and get that next score. Not how we wanted the second half to go. But lots of lesson in there for us to learn and get better.”

A lot of credit from both Farrell and Sexton went to the tight five, especially in the closing phases of the match when Scotland were sweeping into the Irish 22, pounding the Irish defence and bodies went on the line. With injuries to Dave Kilcoyne and Caelan Doris, the replacements were also called in earlier than planned. Loosehead prop Cian Healy had the unique experience of coming on to the Aviva pitch three times during the game.

“You can’t account for some of the bravery there today,” said Sexton. “Some of the guys tracking back. Some of the front five guys having played 75 minutes tracking back and making the tackle. Unbelievably proud for me to captain those boys. On to next week now.”

Doris and Kilcoyne both departed with HIAs, Garry Ringrose picked up a hand injury and is due a scan, while Tadhg Furlong had tight calf muscles after some epic yardage. Sexton also ended the day icing his ankle but there was no mention of any injury to the outhalf, who gave way to Ross Byrne after 75 minutes.

Overall delight. But plenty of things to take away to the Irish base in Sport Campus Ireland before the visit of Wales next week against whom Farrell admitted Ireland must be better.

“Some of the decision making was good. Some of it was a bit wayward,” said the Irish coach. “Those type of things are going to be a work in progress. We didn’t have much field position but when we got into the 22 I thought we were quite dynamic.

“It was pretty clinical as far as the try was concerned. There was some good but obviously plenty to work on. We’ll have to improve next week.”

Farrell also took some time out to reflect on the lack of time Sexton had to prepare for the match as he recovered from a knee injury. Despite his try Sexton admitted the rust was visible in his game. But Farrell was having none of it.

“He hadn’t done any team training or rugby training until we touched down in Portugal,” said Farrell. “How long out all together, eight nine weeks . . . for him not to touch a ball and not to fight in anger until Thursday of this week. That says it all about the man.”