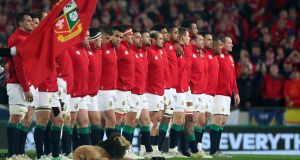 The 2021 Lions tour to South Africa is expected to go ahead on its scheduled dates. Photograph: Billy Stickland/Inpho

Confirmation is expected this week that the 2021 British & Irish Lions tour of South Africa will not be moved from its scheduled dates in July and August, with organisers unable to wait any longer for an end to negotiations over the long-term shape of the global fixture calendar.

There had been talk of a possible switch to September and October as part of proposals to amend the existing international ‘window’ with the rescheduled Tokyo Olympics also set to coincide with next summer’s tour dates. However, Lions officials set a deadline of the end of June to finalise their itinerary and are now ready to revert to the original schedule.

Any further delay would have caused complications with venues and commercial deals, as well as causing further frustration for supporters hoping to book tickets and tour packages. Up to 30,000 fans could potentially end up travelling to South Africa although Covid-19 uncertainty remains an obvious concern.

It is a further sign of the continuing inability of unions, clubs and player representatives to agree a global calendar that works for all. In order to accommodate the Lions tour, next year’s Premiership season cannot now be extended beyond June 26th which means the new campaign will have to commence in November to accommodate all domestic and European club fixtures.

The clubs are due to share their vision for a new global season this week which will categorically reject the idea of playing a solid block of Tests in October and November. They believe the unions’ planned new-look international series should take place in the existing July and November slots. - Guardian

Wilder pays tribute to McGoldrick’s attitude as goal drought ends 17:58
Here is your handy guide to sport on television this week 17:01
Trezeguet double against Palace boosts Aston Villa’s survival hopes 16:48
Lewis Hamilton puts in dominating drive to claim Styrian Grand Prix 17:43
‘Jack used to call me his official grasshopper keeper. We had a great time’ 16:26
Crossword Get access to over 6,000 interactive crosswords