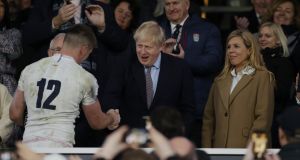 British prime minister Boris Johnson has criticised a review by English rugby union authorities into the song Swing Low, Sweet Chariot, saying the focus should be on the “substance” of efforts to combat racism.

The Guardian revealed on Thursday that the Rugby Football Union was looking into the appropriation of the song by England supporters, saying many of them are unaware of its origins as a song about slavery, and reviewing its context following the Black Lives Matter protests.

Asked whether he would support a potential ban on the song, Johnson said he felt the issue was a distraction.

“My only thought about this whole issue is, frankly, what people need to do, I think, is focus less on the symbols of discrimination or whatever, all these issues that people are now raising, to do with statues and songs and so on,” he told Sky News during a visit to a school in Hertfordshire.

“I can see why they’re very emotive, I understand that. But what I want to focus on is the substance of the issue,” he went on. “I want to make sure that this is a society where people can advance on their merits, achieve fantastic things and don’t face prejudice or discrimination.”

Johnson used an article for the Daily Telegraph on Sunday to discuss statues, saying he would “resist with every breath in my body” any attempts to remove Winston Churchill’s statue from Parliament Square, a move that no one has yet proposed.

Following the review, the RFU could urge English supporters not to sing Swing Low, Sweet Chariot, whose credited author is Wallace Willis, a freed slave from 19th-century Oklahoma.

In other comments during the school visit, Johnson said most people barely knew the words to the song.

“I certainly don’t think there should be any sort of prohibition on singing that song. My curiosity is why don’t people seem to know the rest of it – I’d love to hear the rest of it.”

It is believed the song was first sung at Twickenham, the base of the England rugby team, when Martin “Chariots” Offiah was playing in the 1987 Middlesex Sevens tournament. The following year it became a popular refrain among England supporters when Chris Oti scored a hat-trick against Ireland.

The former England international Brian Moore said he did not understand why the song had become so popular among spectators.

“This was sung in rugby clubs when I was still a colt and well before Martin Offiah and Chris Oti played senior rugby,” he tweeted. “It was sung because of the rude gestures that went with it and without any thought of its origins. The world has moved on and, rightly, things that were normal then should not necessarily be normal now.

“Had today’s context been known, then it might not have been sung. Among other reasons for the RFU encouraging people not to sing it, one of the main ones is that most people only know two verses and it’s crap as a national song because it has no relevance to England.”