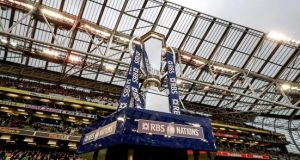 Ireland travel to play France on the opening weekend of the 2018 Six Nations. Photograph: Billy Stickland/Inpho

Ireland will open the 2018 Six Nations Championship with a trip to Paris to take on France on Saturday, February 3rd (4.45, Irish time) and conclude their campaign against the country they denied a Grand Slam to this season, England, on St Patrick’s Day (2.45).

England’s proposal to reduce the Six Nations by a week hasn’t been accommodated for the next two years at least, having met widespread opposition from rivals and players, including some of their own.

The Six Nations fixtures have been released for the 2018 and 2019 tournaments and while Joe Schmidt’s side have no Sunday fixtures next year they will play both Italy at the Stadio Olimpico and France at the Aviva stadium on Sundays in the 2019 season.

After starting a game against Guy Noves France, Ireland have three home matches in succession against Italy, Wales and Scotland in that order before finishing up against Eddie Jones’s England, the defending champions, at Twickenham on March 17th.

In 2019, Ireland open their tournament campaign against England at the Aviva stadium in the late game on Saturday afternoon before travelling to Italy and Scotland. They then host France at home and their final game will be a trip to the Principality stadium to take on Wales. The ‘Super Saturday’ concept of three games on the concluding Saturday of the 2018 and 2019 competitions has been retained.

Wales and Scotland get things underway next year in Cardiff on Saturday, February 3rd. Back-to-back Championship winners England will then begin their tilt at a third straight title on Sunday February 4th in Italy.

A Friday evening clash for the Guiseppe Garibaldi Trophy between France and Italy kicks off Round Three. For the first time ever, this fixture will take place outside of Paris. A venue for this match will be announced in the next few weeks. The Calcutta Cup will be contested between England and Scotland in Edinburgh, and Ireland and Wales play out a potentially crucial clash in Dublin.

The Centenary Quaich will be on the line again as Ireland host Scotland in Round Four, with the Scots defending that trophy after dramatically winning 2017’s encounter in Edinburgh. England will travel to France for ‘Le Crunch’, and Wales welcome Italy the following day.

As has been the case so often before, the Championship title could well be on the line on Super Saturday, March 17th.

Italy and Scotland get things underway in Rome at 12.30pm, before Twickenham hosts a repeat of the final game from the 2017 Championship, as England lock horns with Ireland in a critical encounter which could see the Millennium Trophy, the Triple Crown and possibly the Championship at stake.

Wales against France in Cardiff at 5.00pm will round off next year’s tournament, and the 2018 Six Nations Champions will be crowned immediately after that match.

“We are delighted to confirm the fixture dates for the 2018 Championship, coming shortly after a record breaking 2017 edition,” said Six Nations Rugby chairman Pat Whelan. “We enjoyed record figures across TV and digital and look forward to continuing that trend over the next two seasons.”

The 2019 Championship will begin on the weekend of February 1st/2nd, and will run until March 16th. Both the 2018 and 2019 Championships will continue to see rest weeks after Rounds Two and Three as in previous years.