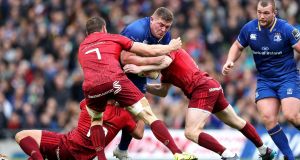 Leinster’s Tadhg Furlong is tackled during their victory over Munster on Saturday. Photograph: Billy Stickland/Inpho

The cornerstones of not conceding points in rugby are discipline and defence.

While the switch from the Guinness Pro14 to the Champions Cup and Challenge Cup is akin to moving from ordinary to honours level given the step up in intensity, the figures demanded for the Irish provinces to be successful don’t change appreciably.

This week’s column focuses on defence because in general terms, based on data collated by World Rugby, more than 75 per cent of penalties are given against the defending team.

Six weeks of the newly revamped Pro14 offer a decent body of work to sift through and examine how the Irish provinces are faring in a number of categories, specifically the number of penalties conceded, the number of turnovers conceded and the average percentage of tackles missed.

There is an element of comparing apples and oranges here in that the four provincial coaches were handicapped in selection, some to a much greater degree than others, based on late returning players from Lions and Ireland tours. This will be the first weekend, injuries notwithstanding, that they’ll pick unencumbered by any other concerns.

Ulster have conceded the fewest penalties (48) at an average of eight per match while Connacht (60) are at the other end of the scale. Kieran Keane’s side have won only one match and that will skew the figures slightly as will coughing up an abnormally high 13 and 14 penalties in defeats to the Dragons and Blues respectively.

Ulster have conceded the most turnovers with a total of 99, or 16.5 per match while the market leader is Leinster with 84 and an average of 14 per game. A direct correlation can be drawn between Ulster’s only defeat in the Pro14 this season, away to Zebre, and a season-high 20 turnovers in that game.

Connacht currently hold the four-cornered record for the fewest turnovers (10) and that came in their most recent performance, a hard fought 16-8 defeat to Ulster at the Kingspan Stadium.

When it comes to totting up missed tackles Leinster head coach Leo Cullen might be the most upset as the province have missed a whopping 116, included 58 (31 against the Southern Kings and 27 against the Cheetahs) on their two-match tour to South Africa.

Connacht lead the way with 87 with Munster (88) and Ulster (93) not far behind but to establish a fairer reflection on the way a team has defended it’s germane to look at the tackles made to missed percentage; there is only a minor alteration to the pecking order with the western province still pre-eminent (13 per cent), Munster second (14 per cent) with Ulster and Leinster in a tie for third on 16.6 per cent.

So given that Leinster and Ulster have won five of six matches, Munster four and Connacht one and that the latter has the lowest average missed tackles percentage, it is Connacht’s attack rather than defence that is an obvious area for improvement.

Going into European competition this weekend, a quick look back at the opening pair of matches in last year’s Champions Cup – Connacht are in the Challenge Cup this year – reveals that Munster, who won both their matches produced the best figures, conceding a total of 10 penalties, 26 turnovers and on average missed 13 per cent of their tackles.

Ulster lost to Bordeaux-Begles in their first game but the following week in Belfast edged out the Exeter Chiefs 19-18, a match in which they conceded eight penalties and missed just five per cent of their tackles.

Leinster host Montpellier at the RDS on Saturday, who they lost 22-16 to in round two in France last year.Their missed tackle percentage in that game was 25, compounded by 20 turnovers in possession.

So the case for the defence appears to be that the penalty count must remain a single digit, and that anything that strays above the teens in both turnovers and missed tackle percentage won’t lead to a happy outcome.