Gordon D’Arcy: Keeping the ball is the way to beat Montpellier 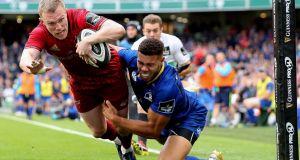 Keith Earls scores a try despite Adam Byrne’s best efforts. Byrne will play for Ireland sooner rather than later. No harm getting a lesson from Earls along the way. Photograph: Dan Sheridan/Inpho

It’s Freshers’ week 1998 and I’m in Stradey Park. In a shed. I’m 18 and surrounded by grizzled old men. Some of whom are over 30. There is barely enough oxygen to breathe.

Trevor Brennan is strapping his wrists. I’m desperate to blend in. I strap my wrists. It is fingertip cold outside. I was freaked out getting on the plane last night. I’m barely out of boarding school so airplanes are a novelty.

Did I mention the cold? To the bone.

Anxiety clutters my mind. Should I even be here? Jesus, marking Wayne Proctor on my European debut. My jersey fits like a baggy dress. Never mind, don’t want to bother anyone. I tuck it in. Worst of all, one my socks is smaller than the other.

I really shouldn’t be in Llanelli! The sock situation has my head in spin; should I ask for a change? Is this important? I could be home watching Leinster on telly. Actually, it’s a Saturday afternoon in September, I should be drinking with my mates who have just moved into various pads around Dublin.

The low metallic buzzing in my ears drowns out every word our captain Gabriel Fulcher utters.

Into the tunnel. Thoroughbreds in the stalls. Visible fog hustles from throats, the stench of deep-heat is overpowering.

An uncomfortable sensation snaps me back to the moment. I look down. No blood flowing into snow white hands. Tear off strapping as we march out and suddenly, on touching the grass, my mind clears. This is where I belong. These huge men become other rugby players, and I know I can do things most of them cannot. Even my voice deepens as I demand the ball in the opening seconds. Wayne Proctor gets the goose step.

We win. I score a try on my European debut. But youthful confidence is quickly eroded. Christophe Dominici has a bag full of Irish scalps. Within a month mine’s added. The great French winger turns me inside, out and onto my arse because I make every mistake in the book. I rush up, I am too square. At least I’m not alone. Eight tries in Paris, two for Dominici, and Diego Dominguez converts them all. Stade 56-31 Leinster.

Afterwards, I am questioning if I will make it as a professional rugby player. This feeling comes and goes, always returning over the next 17 seasons.

But nobody wants to read about that. Well, Adam Byrne might take some solace from a bygone story of a Leinster winger. Byrne will play for Ireland sooner rather than later. No harm getting a lesson from Keith Earls along the way. Not that Earlsey would have been overjoyed by the sight of Adam soaring through the sky.

I’d say the second Munster try was dealt with first thing Monday morning. Adam knows by now to keep his shoulders square on the man he is marking. He knows to only have his head looking inward at Tommy O’Donnell. He knows that giving himself a sprinter’s chance is not enough at this level. All this probably registered before Stuart Lancaster or Girv Dempsey pulled up the clip.

Joey Carbery saw the danger. Carbery is seen pointing for Byrne to cover Earls as he tracks across to tackle O’Donnell. Adam is reminded of the value of trust. This is a split-second decision.

Rarely if ever should a defender show his back to an opposing winger. Matt O’Connor and Joe Schmidt always coach the importance of keeping your feet under you and your momentum building in the direction you need to accelerate towards.

Adam is back-pedalling with his shoulders tilted to the right touchline until he turns into O’Donnell and by having to pivot he loses valuable yards to Keith.

All this is fixable. And needs to be with Nemani Nadolo’s frame blotting out the sun this Saturday. Byrne needs to make the phenomenal Fijian worry about him – in the air and on the track – not the other way around.

Leinster need to keep the ball to hurt Montpellier. I think the game plan to defeat Munster was tailored with one eye on starving Vern Cotter’s glittering array of attacking options.

Stuart Lancaster has helped to sculpt Leinster structures over the last year. I can see a clear plan of ball retention that only needs upgrading for Montpellier. Slog it out, keep possession, flawless discipline, try to shorten up the defensive line until Johnny ups the tempo and takes one of the opportunities they have created.

Last Saturday I could see lots of space in behind Munster, yet Johnny and Luke McGrath rarely kicked into these areas despite the promise of a pay off possibly because Nadolo or Jesse Mogg would be lurking a week later.

Players aren’t lying when they talk about one game at a time. On Monday the coaches lay out a game plan. Not a double game plan. Execute what we say and you will beat Munster. Seven days later and small alternations can put Montpellier away. Players are already in the mindset. It becomes about ironing out small errors and adding a few surprises.

That is coaching. Leo, Stuart, Girv [Dempsey] and Fogs [John Fogarty] have short and medium-term strategies. The players don’t need to know everything. Keeping the ball is the way to beat Montpellier. Hardly revealing a trade secret, but ensuring Johnny is making more decisions than Aaron Cruden or Ruan Pienaar should mean that Leinster keep racking up scores. See the three, six, nine points from Sexton penalties that broke Munster.

The game ends and the process towards another starts. I never enjoyed the lull period. As my career meandered forward the aftermath of games tended to feel worse than the ’98 preamble. It’s no longer doubt, it’s reality. Every single tiny error festers. Disappointment is only dismissed by the protective cloak of preparation and the next opposition alleviates any fear, anger or anxiety.

But in those moments immediately after games your gut never lies. A performance sheet arrives within a few hours. Tackles; the quality of each tackle, any and all system or defensive errors laid bear. Rucks hit; what your entry into each ruck looked like, technique is appraised, the result of each ruck you entered. Attack; what went wrong and how, number of passes, quality of each pass. Carries; how many metres.

If there is a sinking feeling as you are trying to talk to your wife, your parents, your mates, even if they are saying you did this or that well, you always know.

And the voice, that voice inside never lies, he’s whispering in your ear, reminding you that you weren’t good enough. This voice was always a catalyst for me to be better. Perfect practice; we are what we do every day. Keep striving to silence your harshest critic.

Sometimes it’s out of your hands, when you’re nervous around selection your voice is reminding you why, that’s the worst anxiety of all, as many players revealed in a recent Rugby Players Ireland survey.

By close of business Monday or first thing Tuesday the players know they are in or benched or dropped. This clarity is needed. Besides ’98, the first European week of a season is where every pro rugby player wants to be. It should be enjoyable. The tension builds but it can drive players on.

Take the past few days. Munster are beaten and a massive French club, owned by a Syrian billionaire, is coming to the RDS. The lads will be floating. Upbeat. The build-up is everywhere they look. The public are knee-deep in the rugby season. They have warmed to these young Leinster players.

All the planning is in place for Montpellier. Tomorrow brings a dark period, the 48 hours until kick-off when doubt and fear can creep into any man’s psyche. By my mid-20s I learned to control that.

Then comes the changing room. I hear Stradey Park has been demolished. There aren’t many sheds left in the Champions Cup. Also, strapping that doesn’t stop circulation is recommended, body hugging jersey and matching socks.

Into the stalls. Onto the grass. Home sweet home.