Ian Madigan nears Bordeaux exit but has not heard from IRFU 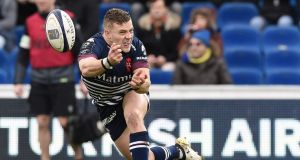 Ian Madigan needs Bordeaux-Bégles to sign a back-up outhalf for Simon Hickey before negotiations can begin to join another French or English club.

Madigan is seeking a release half way through a two-year contract because director of rugby Raphaël Ibañez has benched him in every Top 14 match since October 30th.

The 27-year-old is represented by Ryan Constable and talks with the club are ongoing, but The Irish Times has learned that there has been no contact between Madigan and the IRFU.

Connacht would be the obvious move back to Ireland for the 30-times capped international who left Leinster last season due to the lack of game time in the 10 jersey, even after Johnny Sexton moved to Racing 92 in 2013.

When Munster’s Tyler Bleyendaal becomes Irish-qualified in 2018, the only foreign outhalf in the provincial system will be one-cap Springbok Marnitz Boshoff. The South African, who arrived in December, made two appearances for the Pro12 champions before suffering a shoulder injury.

However, it’s unlikely that the budget of incoming Connacht coach Kieran Keane could sustain keeping Boshoff while at the same time competing with the salary Madigan can command in the Top 14 or Premiership.

According to Midi Olympique, Toulouse’s former England outhalf Toby Flood is being lined up by Bordeaux.

Madigan’s frustrations were exacerbated by the lack of minutes during January’s Champions Cup window when Ibañez started him in Belfast against Ulster only to replace him with Hickey, a 23-year-old Aucklander, on 59 minutes.

“Is he first choice for Bordeaux?” asked Ireland forwards coach Simon Easterby when the issue of his non-selection was raised before the Six Nations.

That same point was reinforced by Joe Schmidt, along with access to foreign players, when explaining the decision to name Munster reserve 10 Ian Keatley on the bench in Edinburgh and Rome.

Schmidt also noted that Madigan missed out on selection for the November series due to a groin injury, which allowed Joey Carbery to win three caps off the bench in victories over New Zealand, Canada and Australia.

The 21-year-old was not recalled by Schmidt this week despite his two tries on return from ankle surgery against Edinburgh last Friday. Ross Byrne took the kicking tee off Carbery when he came on for the injured Rory O’Loughlin.

The entire Bordeaux experience, apparently, has not lived up to the standards Madigan had grown accustomed to at Leinster. The club are ninth in the Top 14 and out of Europe. Ibañez has missed a few matches this season due to commitments as a television pundit, while Wallaby winger Adam Ashley-Cooper – a major reason for Madigan signing in the first place – was told last month that his contract would not be renewed.

Ironically, Leinster is one of Ashley-Cooper’s options for next season.

But Hickey has proved Madigan’s main problem. The presence of both outhalves prompted French international Lionel Beauxis to seek, and get, an early release from his contract to join Lyon last week.

Northampton looks like a logical move for Madigan as JJ Hanrahan returns to Munster this summer.

“I’d personally love to see him back in Ireland,” said Ireland manager Paul Dean. “We’ll be able to invite him to the sessions, keep an eye on him and watch his progress. It’s difficult when you’re abroad . . . He’d be better coming home in my book, let’s say.”