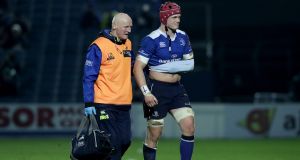 Josh van der Flier leaves the field during Leinster’s game with Edinburgh on Friday. His shoulder injury is expected to keep him out of the rest of the Six Nations. Photograph: Morgan Treacy/Inpho

In stark contrast to previous meetings between Ireland and France, the two squads continue their preparations for next Saturday’s pivotal round-three meeting in near identical fashion. In other words, the innate advantages to Ireland’s centrally contracted system are not so pronounced this year.

Both Joe Schmidt and Guy Novès finalised squads of 30 and 31 players last night in readiness for next Saturday’s clash at the Aviva Stadium from positions of relatively health.

As feared, although there has been no update on the shoulder injury Josh van der Flier picked up in Leinster’s injury-bedevilled win over Edinburgh on Friday night, the flanker’s tournament appears to be over.

“Josh did a bit of damage to his AC joint,” said Leo Cullen. “I don’t know the severity of it. He just took a direct impact on his shoulder.”

Others to be culled from the 40-man squad Schmidt had named for the opening two games of the Six Nations away to Italy and Scotland are David Kilcoyne, Finlay Bealham, Ultan Dillane, Billy Holland and Jack Conan, with the Connacht lock Quinn Roux being called up. It is not clear if any of them, especially Dillane, sustained injuries. Dillane having played over an hour of Connacht’s win over the Dragons on Saturday.

In the backs, despite scoring two tries on his return to the Leinster team on Friday night, Joey Carbery has not been recalled after winning three caps in November. Instead, Ian Keatley – who was added to the original squad in light of the ongoing calf problems which ruled Johnny Sexton out of those opening two games and leaves him in a race to be fit for the French game – retains his place.

Rory Scannell and Stuart McCloskey, two others in the 40-man squad, also miss out.

As with Sexton, Rob Kearney’s well-being will be clearer as the week progresses, but the tendon injury he sustained in his bicep toward the end of the record win in Rome leaves him a significant doubt. In this scenario, the likeliest option would be for Simon Zebo to switch from wing to fullback, all the more so with Andrew Trimble being fit again to start on the wing.

However, if Kearney is fit, then Schmidt must choose three starters and one replacement from the eight back-three players named in this squad, and somehow accommodate Trimble, or not, in the match-day squad, bearing in mind Craig Gilroy’s hat-trick off the bench.

Schmidt has said the back three and the backrow are the management’s most difficult selection conundrums, although here again van der Flier’s misfortune could simplify the equation, and in particular will make it easier to accommodate the fit-again Peter O’Mahony.

Given the astonishing work-rate and contribution of CJ Stander, Seán O’Brien and Jamie Heaslip, the likeliest outcome when Schmidt announces the starting XV and replacements is that O’Mahony will be named on the bench.

As well as restoring Rory Best to the middle of the frontrow to lead the side, the other decision for Schmidt and co is whether to recall Jack McGrath to the loosehead position in place of Cian Healy. Iain Henderson, also fit again, will assuredly return to the match-day squad in some shape or form.

As with the round of matches before the Six Nations, for the first time in the modern era, a 24-man French squad were rested from their club’s Top 14 matches over the weekend.

The squad assembled in Nice last Thursday evening, and as with Ireland in Monaghan, conducted an open training session in Nice on Friday, and all of them also hailed the welcome break from their normal base in Marcoussis on the outskirts of Paris.

“It feels good to get out of Marcoussis, what we are used to seeing ... and to train with the good weather,” said prop Rabah Slimani. The squad will remain in Nice until Thursday, when they fly to Ireland, with Novès to name his side on Thursday morning.

The 24-man squad featured the return of Camille Chat, Eddy Ben Arous and Paul Jedrasiak, and on Saturday Novès added the Toulon pair of Mathieu Bastareaud and Charles Ollivon following their win over Lyon. This raises the spectre of Bastareaud charging down Sexton’s channel, if Sexton is named, but it’s unlikely that France will break up the Gael Fickou-Rémi Lamerat partnership. Last night, Novès added the names of Christopher Tolofua, Mohamed Boughanmi, Jean-Marc Doussain, Henry Chavancy and Brice Dulin.

France’s one casualty from their 22-16 win over Scotland, Loann Goujon, will most likely result in a recall from Damien Chouly, and thus a reversion to the same starting team which played against England at Twickenham. The Racing flanker Bernard le Roux is expected to be named on the bench.

1 Six Nations: No place to hide for Ireland’s misfiring captain
2 Contepomi says Leinster can learn lessons from nature of Ireland’s defeat
3 From stationary carriers to centres of excellence - five things we learned
4 Questions raised over Ireland v Italy fixture due to coronavirus
5 McIlroy takes his foot off the pedal and will skip the Honda Classic
Real news has value SUBSCRIBE