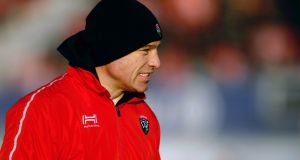 Richard Cockerill has been named as the new head coach of Edinburgh Rugby. Photograph: Paul Harding/PA

The ex-England hooker has signed a two-year deal with Edinburgh, with acting head coach Duncan Hodge returning to his previous post of backs coach.

Cockerill jumped straight into a short-term role with Toulon after being sacked by Leicester Tigers last month following eight years at the Welford Road helm.

Now the 46-year-old has agreed to take on a new challenge with the Scottish capital club, in a rapid return to permanent coaching work.

“I am very pleased to have secured Richard’s services given how highly sought after he was from leading clubs across Europe,” said Scottish Rugby chief executive Mark Dodson.

“As a highly-experienced, winning coach we targeted him and worked hard to ensure his talents could be secured for the benefit of Edinburgh Rugby.

“I believe his appointment clearly demonstrates our commitment to developing and maintaining success at our professional clubs in Scotland.

“I’d like to thank Duncan Hodge for all his hard work with the club so far and look forward to him continuing to contribute to Edinburgh Rugby.”

Former Leicester hooker Cockerill coached the East Midlands club to three Premiership titles, but was dismissed as director of rugby in January after a run of disappointing results.

Leicester head coach Aaron Mauger took the Welford Road reins on an interim basis with Cockerill ultimately the fall-guy over a clash of cultures and coaching styles.

Toulon drafted Cockerill into boss Mike Ford’s coaching set-up just four days after he was dismissed by Leicester, in a role to run until the end of the current campaign.

And now Edinburgh have seized the opportunity to install Cockerill as their new long-term boss.

Cockerill, who won 27 caps for England, said: “I am very much looking forward to a new challenge and the opportunity at Edinburgh Rugby ticked all the boxes.

“The conversations I had with Mark Dodson and Scott Johnson (Scottish Rugby director of rugby) were instrumental in understanding what the vision for Edinburgh Rugby is and it is a project I’m excited to be a part of.

“I’m also relishing the chance of coaching in the Guinness PRO12, which is a new league for me, and working with a clearly talented group of players.”

Edinburgh’s existing coaching trio of Hodge, Stevie Scott and Pete Wilkins will remain at the club to work under Cockerill.