Johnny Sexton and Rob Kearney on course to face French 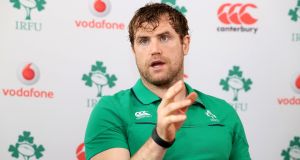 The proof will be in the pudding, but both Johnny Sexton and Rob Kearney are both on course to resume full training on Tuesday with a view to proving themselves fit for selection when the team to face France in the Six Nations on Saturday is confirmed on Thursday afternoon.

Sexton hasn’t appeared in the Six Nations yet, having been withdrawn 20 minutes into Leinster’s final European Champions Cup pool game away to Castres over four weeks ago while Kearney was forced off towards the end of Ireland’s record win in Rome last Saturday with an injury to the tendon in his bicep.

However, according to Irish team manager Paul Dean, Sexton and Kearney both believe themselves to be 100 per cent fit and merely need to prove this to the medical staff to ensure their availability for the French game – in which case both will assuredly start.

“Johnny’s been with us. He was with us in Monaghan, he’s with us all the time. But tomorrow he will train fully. Hopefully when he comes through that he’ll be fine for the weekend.”

Asked if he was confident both will play, Dean said: “Well if you talk to Johnny and Rob they’ll both say that they’re 100 per cent fit and ready to go, so we just need the medics to pass them and they need to prove to us that they are.”

Dean explained that Conor Murray’s workload was managed last week due to the squad training on an Astroturf pitch on Thursday and a Prunty pitch on Friday.

“He was ‘tight’, so we thought it prudent to call up Kieran Marmion. He trained with Connacht on Thursday, with us on Friday and he was rested at the weekend.” But there were no doubts as to Murray’s wellbeing.

Ultan Dillane, it transpired, simply was not picked in this squad, rather than injured in any way.

As for the news that Bordeaux would be sympathetic toward releasing Ian Madigan from his contract with a view to him relocating to the Premiership in England, Dean ventured: “I’d personally love to see him back in Ireland. We’ll be able to invite him to the sessions, keep an eye on him and watch his progress. It’s difficult when you’re abroad, as well all know.”

As for Madigan going to the Premiership, Dean added: “He’d be better coming home in my book, let’s say.” As to whether everything was being done to bring him back to Ireland, Dean merely said: “Yes. Yeah.”

Jamie Heaslip, who last week agreed a contract extension with the IRFU and Leinster which will keep him with the province until after the 2019 World Cup, was asked whether he would like to see his former team-mate return, and said: “I’d just like Ian to make whatever decision is best for him, to be honest.”

In advance of a rare weekend off, Ireland completed a significant amount of work in Monaghan, which Heaslip believes will leave them in good stead this week.

“With the weekend off and no game for us it meant we could go hard and we could dip into kind of mimicking a game simulation type environment from the data we had from our GPS.

“So that’s what we did, we gave it a good go on Wednesday, a lot of us hit numbers the same and above what we did in a game. So that was good to dip into that, both from a physical and mental point of view, to know it’s there.

“If you see our numbers, there’s a lot of running done, a lot of high-speed metres, but we’re managed very well and everything is geared towards performing at the weekend.”

Looking ahead to the game, Heaslip said: “No matter what French side I’ve played against, they’ve always been troublesome. When we played them last year I think there was only one point in the game. They’re a very good side with a big physical pack with some really good guys freshening it up and the backline is potent; there’s dangers and an ability to strike from anywhere.

“To be honest, in my 11 years of playing international rugby that’s been the same every year. Sometimes we get lucky and get the bounce of the ball, sometimes they do but it’s always a good contest I can guarantee that.”

Heaslip enthusiastically welcomed the prospect of Ireland returning to the Aviva Stadium, where they are unbeaten in eight games and three Six Nations campaigns under Joe Schmidt.

“I can’t wait. Like, I love the Aviva,” said Heaslip before enthusing about the atmosphere at the mini-camp in Monaghan. “I don’t know if anyone was there but it was probably the best experience I’ve ever had at an open training session. I know we’ve had more numbers but it was just right on top of you. Very enthusiastic fans.

“I think they were a little bit gutted that their hometown favourite Tommy wasn’t there, but it was really exciting. We kind of fed off that energy, off the back of the atmosphere of the November series, the whole squad are looking forward to the opportunity to maybe running out there on Saturday.

“It’s a cracking place. We always get a full house or close to a full house. The French – with their drums and all that – make themselves vocal and heard, but most of the time they get drowned out by the support of our fans.”