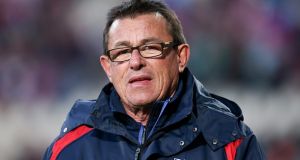 Kieran Keane has been announced as the new head coach of Connacht. Photograph: Martin Hunter/Getty

As reported in The Irish Times last Thursday, Connacht have announced Kieran Keane as the province’s new head coach ahead of next season.

Former All Black Keane joins the Pro 12 champions from Super Rugby side the Chiefs and signs a three-year contract at the Sportsground.

He replaces compatriot Pat Lam who is leaving in the summer to join English Premiership side Bristol after four years at the Sportsground.

Keane is currently backs coach at the Chiefs, and his side scored 76 tries during 17 games in the 2017 campaign.

And he made his biggest mark while in charge of Tasman Makos, who he led to ITM Cup Championship victory and promotion into the Premiership in 2013, before reaching the final the year after.

On his appointment, Keane said: “During my recent trip to the West of Ireland, I had the chance to meet many people within Connacht Rugby and I was immediately taken by the genuine passion they have for the people they represent and the ambition they have to achieve so much more.

“It was clear very early on in our discussions that Connacht Rugby was a good fit for me and I am looking forward to the challenge ahead and to working with the players and everyone associated with the club.”

Connacht chief executive Willie Ruane said: “ Following a rigorous process, we are delighted to be able to confirm the appointment of Kieran as our new Head Coach.

“Kieran’s rugby CV speaks for itself and immediately highlighted to us that he was the perfect fit for Connacht Rugby in the context of the profile of coach that we were looking for.

“Kieran is a highly experienced Head Coach with a winning track record and a proven ability in identifying talent and maximising the full potential of that talent. His ambitious and exciting brand of rugby is also consistent with the way Connacht Rugby and in particular our players want to continue to play the game into the future.”

1 Saracens to accept second 35-point deduction and effective relegation
2 Welcome to Iten in Kenya – home of champions and cheats
3 How do Klopp’s Liverpool measure up against greats of past?
4 Shane Lowry’s Abu Dhabi defence crumbles in the sand
5 Sonia O’Sullivan: How did Melbourne become the world’s most polluted city?
Real news has value SUBSCRIBE