‘I feel a bit sorry for them’: Referee Crabtree shows abusers who’s in charge 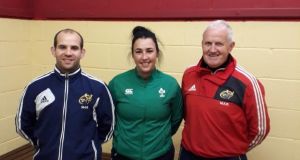 Gráinne Crabtree after taking charge of her first AIL game between Seapoint and Bruff in November 2018.

When Gráinne Crabtree blows the full-time whistle, she can’t jump in the air or sink to the ground like the players. That’s alright with her. She knows half the crowd are annoyed with every decision, and that’s alright too.

It’s part of the deal. She was a player before, she knows referees don’t have friends on the pitch. She likes that, she’s there to do a job.

But the day four men decided they didn’t like watching a woman on their pitch was far from alright. Over 80 minutes they told Crabtree what they thought of her, loudly and often. Not just of her decisions but of her, a woman on their turf.

Fifteen months, two investigations and one boycott later, Crabtree is still a referee. Still a proud referee; she shows up to talk wearing her green IRFU tracksuit top.

“My thing is I’m not a female referee, I’m a referee who’s a woman. It wasn’t nice on the day, I think I’ve learned a lot about myself as a referee as a result of it. The response of other referees and other rugby people when I’m out and about was wonderful. I think it’s more of a reflection on them men, that was the first time that happened,” she says.

It was one game, but for Crabtree who mentors young women referees, it couldn’t be ignored. She put too many years into rugby and Gaelic football to say it’s grand and walk away.

That game changed me as a referee, because it made me more resilient

As a girl she played football with Steelstown Brian Óg’s in Co Derry. Survived playing on a team with her four sisters, coached by her father. It was mostly harmonious.

The switch to rugby came when City of Derry opened a women’s team. She went for a look and stayed.

Crabtree left her first game sore and battered but happy. A new challenge that led to provincial rugby with Ulster. She was happy with that shirt, but injury intervened.

“I got my leg stuck in the ruck, I turned, and the muscle ripped. I tore the calf-muscle off the bone, the ligament was damaged. It took two years to get better. I had five operations, all under general anaesthetic. It was a bit crappy,” she says.

And worse, doctors warned her another rip might not be repairable. The blunt advice was don’t play rugby again.

She didn’t want to hear it but her career in engineering and construction was also stalling. You can’t drag a cast around a building site.

Wanting to stay in rugby, she signed up for a referee course. “It was a challenge for me, it was a way to be on the pitch still. I thought I knew the rules when I was a player, I wish I knew back then what I know now, I’d have been a better player,” she says.

“That first year wasn’t easy, you’re out of your comfort zone. It can get lonely being a referee. So it’s what you make of it, we train together and go for coffee after a game, you need to do things like that. I wouldn’t do this if I didn’t enjoy it.”

“You don’t win as a referee, you don’t have that win, that buzz involved,” she says: “For 80 minutes, I’m not in my own head, I’m fully focused on the game. Everything in your head is your decisions, your routines in the game so those 80 minutes can be really enjoyable.”

Living near Belfast, she drives to games in Cork or Limerick. On duty every Saturday, she’s thankful for flexitime, hitting the road early on Fridays. Weekdays there’s training, positional drills done outdoors, gym-work, spin classes. She worked at the Women’s Rugby World Cup, fifth official but she was there.

She praises Helen O’Reilly and Joy Neville, saying everything is easier because they did it first. Easier to visualise herself wearing that shirt, easier for clubs to see her in it.

Slap in the face

So that day in Coleraine came like a slap in the face, shocking for Crabtree and the Ulster Society of Rugby Football Referees.

It was an ordinary day in March; Dromore and Coleraine in the Kukri Ulster Rugby Championship.

There was some shouting from the small crowd, but one group stood out. Four men, supporting Coleraine in club blazers and colours.

Crabtree tried to ignore her sense they had a problem with her. Hard to ignore “The referee’s a f**king slag” a few minutes in, but she tried.

When she gave a yellow card to Dromore and heard “You’re a f**king joke, you hoe”, she knew this was different.

She went to the touch line to give the mark for a Coleraine lineout, and they shouted: “Take off your shorts so we get a better look at your arse”.

The touch judge heard this, said to Crabtree it was “horrendous”. The comments and abuse went on, Crabtree later reported it as “sustained, vile sexist abuse”.

She remembers the crowd seemed to drift back, a space forming around the men.

At half-time she asked her assessor referee what to do, he advised getting Coleraine management involved. Crabtree says the assistant coach spoke with the men. She thought it was done. Back to the game.

But even though Coleraine were winning, the comments continued. The jeering didn’t seem linked to her decisions. It was relentless.

Match over, Crabtree reluctantly approached the men. She told them she would write to the Ulster branch, asked for their names, asked if they had wives or daughters. She was told to “f**k off ”.

Crabtree seemed alone that day, but she wasn’t.

She cancelled plans to go out, staying at home to think how she could have avoided this, what had she done wrong. There was no sense of a job well done. She sent in her first report, supported by senior official Stephen Cooke.

She spins her phone in her hand, uncomfortable with the memories, says: “It was not nice on the day, I wouldn’t really think about it now unless I’m asked about it. It wasn’t about my ability as a referee, it was because I was a woman.

“I could hear them, right through the game. I finished the game. I went over to them afterwards because I wanted them to know I wasn’t intimidated by them, what they did wrong.”

Now on the national referee panel, she has no regrets.

“I feel a bit sorry for them, that is their attitude towards women. My job that day was to referee a game, that’s where my focus was on,” she says.

A disciplinary investigation followed with the club given a suspended fine of £2,000 (€2,238) in April. Crabtree wasn’t happy: “The initial hearing was very disappointing, there’s been a review now of the procedures around abuse.”

She wrote another report, six pages this time, describing feeling “physically sick, disappointed and upset” after the game, stressing it was “continued sexual abuse”.

The Ulster referees announced a boycott of all games involving Coleraine teams.

“The support I got was fantastic, that wasn’t led by me. It was there’s no protection there for us, it’s wasn’t necessarily we are protecting ‘our Gráinne’, it was protecting our referees. Going forward how can we make sure our members never experience this, that it’s dealt with properly. What happened was wrong and it wasn’t dealt with the right way, that’s what it was about,” she says.

A second investigation followed. Coleraine were fined £5,000. In a written apology to Crabtree, the club said they could not identify the men following legal advice on the evidence they had gathered.

Crabtree just says she gave the club all the information she had. BBC NI highlighted the abuse, with calls for the men to come forward. They have not.

She says: “That game changed me as a referee, because it made me more resilient. I was able to prove to myself that I was fit to be doing what I was doing. That’s probably really strange, but that’s it.”

Ulster Rugby said this week they ran workshops with referees on abuse and have plans for more measures next season.

Crabtree refereed her first AIL game in November, taking charge of Bruff and Seapoint. Just getting on with it.

By the end of last season, 18 women were on referee duties with the IRFU. They’re hoping to train up to 15 more next season, and planning for 80 by 2023.

“There’s no different process for me becoming a referee than there is for men. I would be very proactive in trying to encourage girls I played with to become referees, because the more of us there are, the more normal it becomes,” Crabtree says.

There’s glamour too. She went to the Ulster referee awards in April, beautiful in her dress and ever-present false eyelashes. Left as Society Member of the Year. They don’t care she’s a woman, they care she’s a good referee.