Jessie Barr adjusting to life after leaving the track behind her 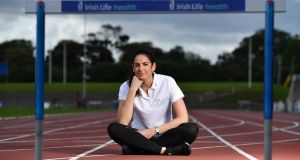 Jessie Barr is well versed in all the brainy quotes of sports psychology. She lived and breathed them from early in her athletics career and they helped propel her to the European final of the 400m hurdles, at age 23, and later that summer make the 2012 London Olympics, with the 4x400m relay team.

They ran in the family too – younger brother Thomas, born on the same day exactly three years apart, overcoming a few hurdles of his own in the same event before winning the European Championship bronze medal in Berlin last August.

Only after three years of walking the line between hope and reality, longing and self-doubt jostling for position, trying again, failing again, Barr eventually turned to another brainy quote for her inspiration: when one door closes, another door opens.

So without any great fuss or fanfare, only the simple realisation life has moved on, she ended her athletics career and started into a new one as a sports psychologist with the Institute of Sport. Her first major assignment will be working the 63-strong Irish team taking part across nine sports at the European Games in Minsk, which get under way on Friday.

“In any sport you can’t help see or think about all these quotes, like ‘never quit’, ‘try harder’, but no, I tried, sometimes maybe too hard, and after years of heartache, all the enjoyment of racing, going over the hurdles, that was gone,” says Barr. “I started in athletics because I just love it, and if you’re not loving it anymore, putting all the time and effort in with no rewards, you eventually have to make a decision. And I didn’t have it in me anymore, to keep battling, the amount of hours in the pool, on the bike, everywhere but running, were too much.

“At the same time I was getting some opportunities in sports psychology, at the Institute of Sport, felt things there were starting to take off. That became a balance. Do I hold on to this dream of athletics? When at the same time the motivation is not where it needs to be, the time and effort is not there?

“Working with athletes now, one thing I say is that you can’t look back with any regrets, it’s all about looking forward, not worrying about performances in the past, or performances that didn’t happen. And I have to practise what I preach.”

That doesn’t mean she can’t wonder what might have been. Just because you’re envious doesn’t make you jealous, and the success of her brother, whose career trajectory has essentially been the complete opposite of her own, will always be a gentle reminder of the possibilities that were never allowed to shine.

“Of course, he’s my close sibling. There is no jealousy of him whatsoever, but I would be envious that Thomas is out there doing what I loved to do, and that’s only natural. We both got into athletics for the same reasons, and I know there are lots of comparisons drawn between our level of talent and ability, and I do believe if I hadn’t had so many injuries, there was potential there for more finals, maybe some medals.”

Indeed Barr was first to make the Waterford family name successful in the 400m hurdles when reaching the final of those 2012 European Championships in Helsinki, while Thomas was eliminated in the semi-finals. She won three national titles in a row – in 2011, 2012, and 2013 – before reality began to bite a little too often: an Achilles’ tendon strain, a calf muscle tear, a minor car accident that resulted in severe foot pain.

She’ll be 30 next month, her best of 55.93 from 2012 still the second-fastest on the Irish all-time list, and having last raced in 2016, Barr has accepted that Tokyo 2020 was beyond her athletics career – only should fit perfectly into her sports psychology career.

“After two years of injury, I raced again in 2016 at Belfast International. A week later I crashed into the back of a car, and ended up with some foot problems that were almost certainly related. A month later I raced again in Geneva and ran like a donkey, 61-something, nothing too bad, just nowhere near where I wanted to be. And that was my last race, so I very much limped away from my career.

“I still came back thinking 2017 would happen for me, and it didn’t. Then I thought 2018 would happen and it didn’t. But after 2016, not making Rio, the motivation did start to waver. It felt like one injury after another, and because of that it was hard to give the effort that maybe I should have done. It was just that constant cycle, rehab, get back into training, another injury. I couldn’t even count the number of times, and the motivation was being chipped away the whole time.

“But I know I was lucky to make the Olympics, win three national titles, make that European final in my first senior event. In the back of your mind there is always the thought ‘do I want to go back?’, but I’ve made the decision now, you can’t let emotion take over.”

It gave her another important lesson in sports psychology: elite athletes by their nature are typically obsessive, but there are some dangers in that.

“The identity thing, always being the athlete, the hurdler, was gone for me too. I’m not that person anymore. Before Rio, I had no doubt I would be on that plane to Rio, sitting beside Thomas, and believed that right up to the day itself. Then when it didn’t happen, that’s hard.

“But one of the things I do know is that sport is not always a fair business. If you’re looking for fairness then don’t go into sport, because I did all the hard work, felt I did everything right, but it didn’t pay off. That doesn’t mean you shouldn’t try your best. There will always be some disappointment.

“Sometimes life can get in the way, and it’s about recognising the priorities, while also getting the balance. And for sure the hardships I did endure as an athlete are helping me now, dealing with other athletes. And I still have the great memories of enjoying athletics, from the minute I first stepped on the track down in Ferrybank, before I had any success. That will always be there.”

Barr is an ambassador for the Irish Life Health Festival of Running, which takes place in Morton Stadium in Santry on July 28th: bringing together the elite and everyday runner, it includes a Mile Fun Run for children and a 3km Run in Santry Park, both finishing on the home straight in Morton Stadium before the Irish Life Health national track and field championships.

1 Dave Hannigan: Trump gets the clubs back out as death toll keeps rising
2 Safe return to play in New Zealand showcases the true value of sport
3 Dr Bob Rotella: ‘If you focus only on the target you’ll play darn good golf’
4 Zoom calls with Rory and the GUI bake-off: Neil Manchip keeping the flag flying
5 Munster braced for worst of financial crisis due to Thomond Park debt
Real news has value SUBSCRIBE